For the first time an Orangutan Release Ceremony has been conducted at the IAR Orangutan Rescue and Conservation Centre in Ketapang, West Kalimantan in collaboration with the Government of Ketapang District and the Natural Resources Conservation Agency  (BKSDA.) 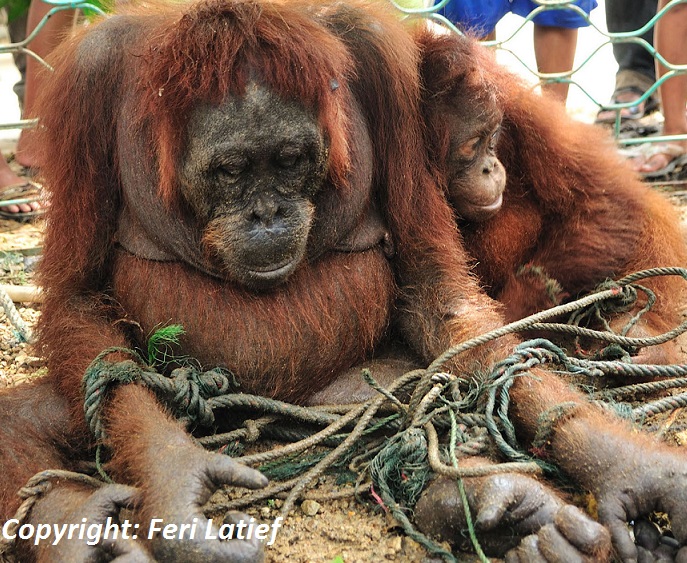 Peni was only three years old when our team rescued her in 2010 from a village called Peniraman, Siantan – Pontianak, West Kalimantan. Peni and her mother were pushed out of their habitat because it had been converted into an oil palm plantation. On their search for food the two orangutans unfortunately came too close to a village where people had nothing better to do than catch both animals and try to drown the mother. Very sadly, our rescue team arrived too late to help Peni’s mother and she died as a result of the torment.

Understandably, Peni was traumatised and terrified when she first arrived at our centre and it took extensive rehabilitation efforts to prepare her mentally and physically for life back in the wild. After a period in quarantine she was socialised with other young orangutans at the centre and gradually settled into her new life. The most difficult task for Peni during her rehabilitation process was to overcome the psychological trauma, but thanks to her strong nature and the company of other orangutans, she did really well from the beginning. She was frequently observed in the forested play area behaving like a wild orangutan, making nests in the trees and rarely spending time on the ground. Peni never became accustomed to people and was classified as semi-wild. While she was undertaking the rehabilitation process it gradually became clear that she was a good candidate for reintroduction.

On the 2 September, Peni was taken to the protected forest of Mount Tarak, bordering the village of Pangkalan Teluk, Nanga Tayap District, Ketapang. Mount Tarak forest was chosen as the release site for Peni after a series of biodiversity, habitat and socio-economic surveys were undertaken by our team revealing that this protected forest has sufficient varied foods available and the resident wild orangutan population is still below the area’s carrying capacity. So the conditions are very favourable to orangutans’ survival. It’s likely that Peni may interact with Helen and Prima who have both been previously reintroduced into the same area. 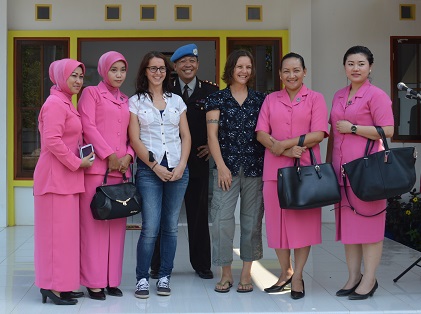 Peni’s release team was symbolically sent on their journey by the Ketapang District Police Chief Commissioner, Mr Agus Setiyoko. The release ceremony was attended by relevant agencies in the local government district of Ketapang, as well as representatives of NGOs and the public. Mr. Agus Setiyoko said "I expect Ketapang Police Board to contribute to raising public awareness of the plight of orangutans and of the need to conserve them and all endangered species." 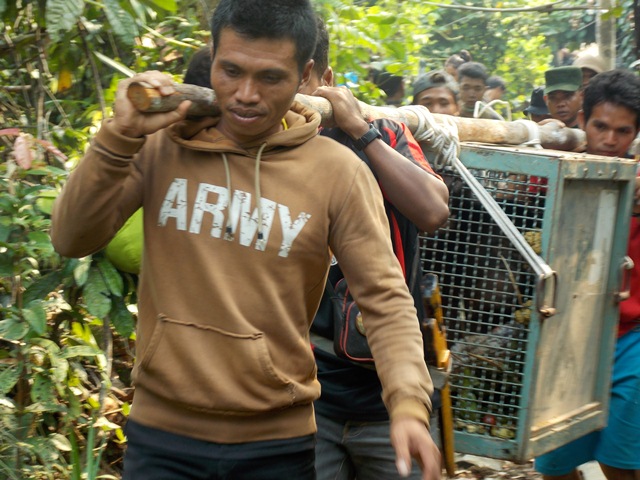 The release team began their journey around midnight and undertook the five hour drive to Mount Tarak during the night when it was cooler and would be less stressful for Peni. At the end of that journey the team had a further three hours to travel on foot to reach the chosen release site. The team consisted of members of IAR Indonesia, staff from agencies in the local government in Ketapang: BKSDA and forestry dept, local conservation group volunteers (Rebonk) and representatives from a local community photographic group.

The local Ketapang government has continuously supported IAR in our efforts to rehabilitate and reintroduce orangutans back into their natural habitats. This is demonstrated by the signing of a collaboration agreement with IAR Indonesia Foundation (YIARI) to safeguard orangutans and their habitat.  None of our conservation efforts throughout West Kalimantan would be possible without the backing of the Ketapang government, and therefore we applaud them for their commitment and endless support.

Mr Sustyo Iriono, Head of West Kalimantan BKSDA, issued a written statement saying that orangutan habitat fragmentation has reached 55% in the last 20 years. He appreciates International Animal Rescue Indonesia stepping in to save orangutans in West Kalimantan and expects orangutans currently still in rehabilitation centres can be immediately returned to their natural habitat in the forest. 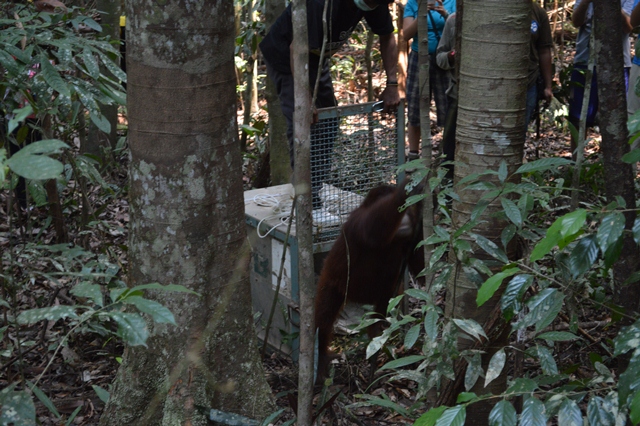 Our monitoring team out in the field confirmed that Peni was doing extremely well and started eating Baccaurea (belimbing darah-local name), a favoured fruit for orangutans, as soon as she was released.  At the end of the day she was observed by the monitoring team making a comfy nest with large branches of foliage. Karmele Llano Sanchez, IAR Indonesia Project Director, said wryly: “I think poor Peni was reluctant to make nests in the enclosure at our centre because the trees have been stripped bare by all the orangutans and no longer have any leaves of them! But now she’s back in the forest Peni has everything she needs to survive.”

After such a tragic start to her life, everyone involved in Peni’s rescue, rehabilitation and release is hopeful that she has a long and happy life ahead of her. 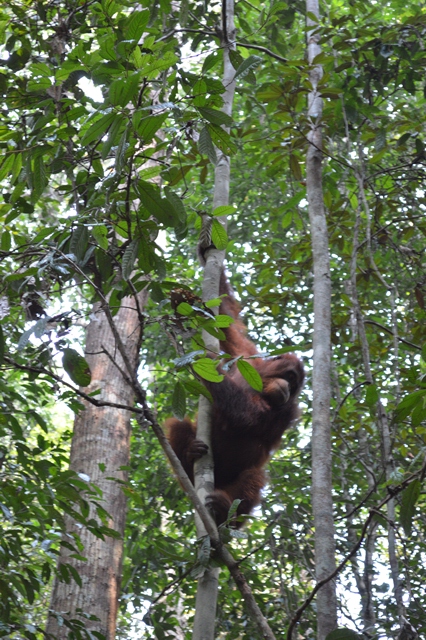 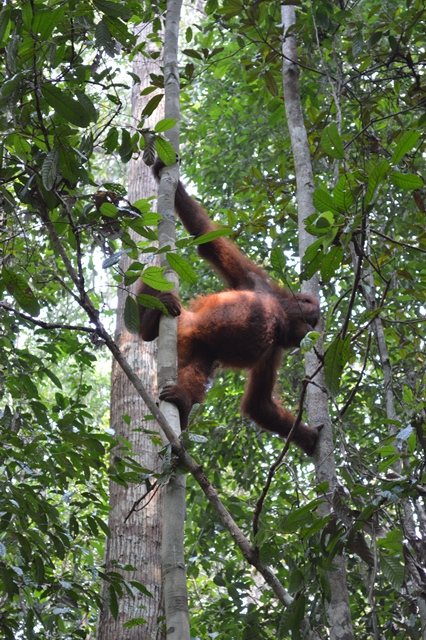 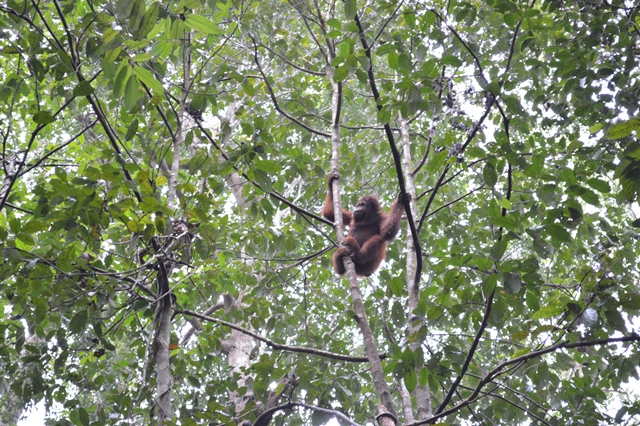 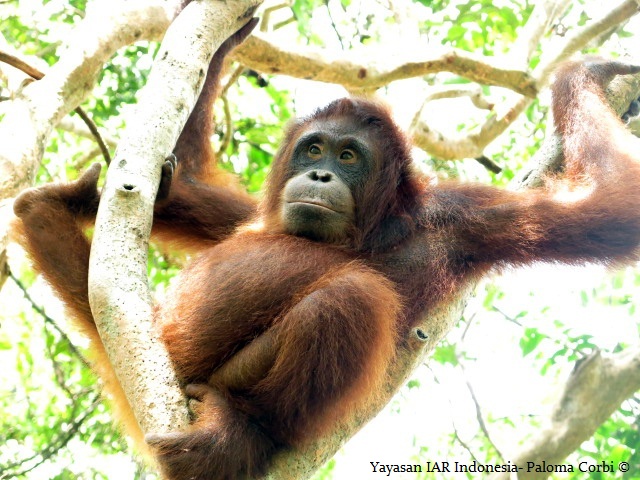 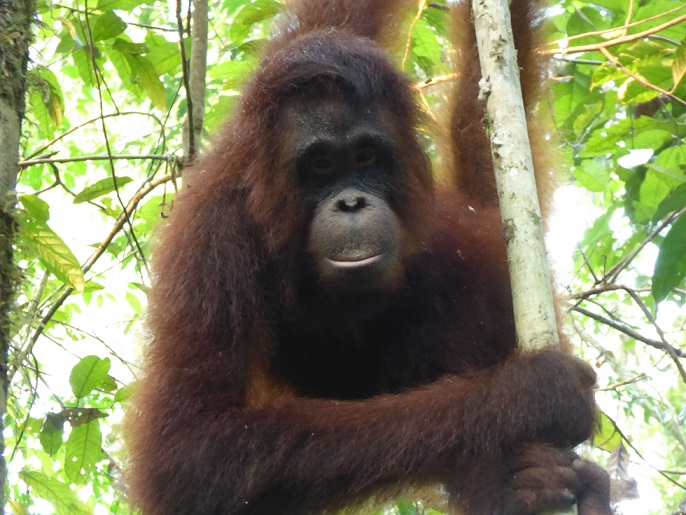