During the past week our team in West Kalimantan (Indonesian Borneo) has rescued three pet orangutans in just four days.

On 13 March the team rescued two orangutans on the same day with the assistance of officials from the local BKSDA (Natural Resources Conservation Agency.)

The first orangutan to be rescued was a one year old female called Teka in Sandai District in Ketapang. We had been notified of her existence by local group Yayasan Palung which is also actively involved in orangutan conservation.

Teka’s owner claimed to have got her from a farmer in Central Kalimantan two months previously. The farmer claimed that the baby had been abandoned by her mother when she was chased by a dog in his rice field. The farmer then took the baby home and cared for her before selling her to Sarif, her current owner, for Rp 500,000 (US$37.)

Teka had been living with Sarif and his family in the house like a child. She was fed on fruits and sweets and was even given a pillow to sleep on at night. 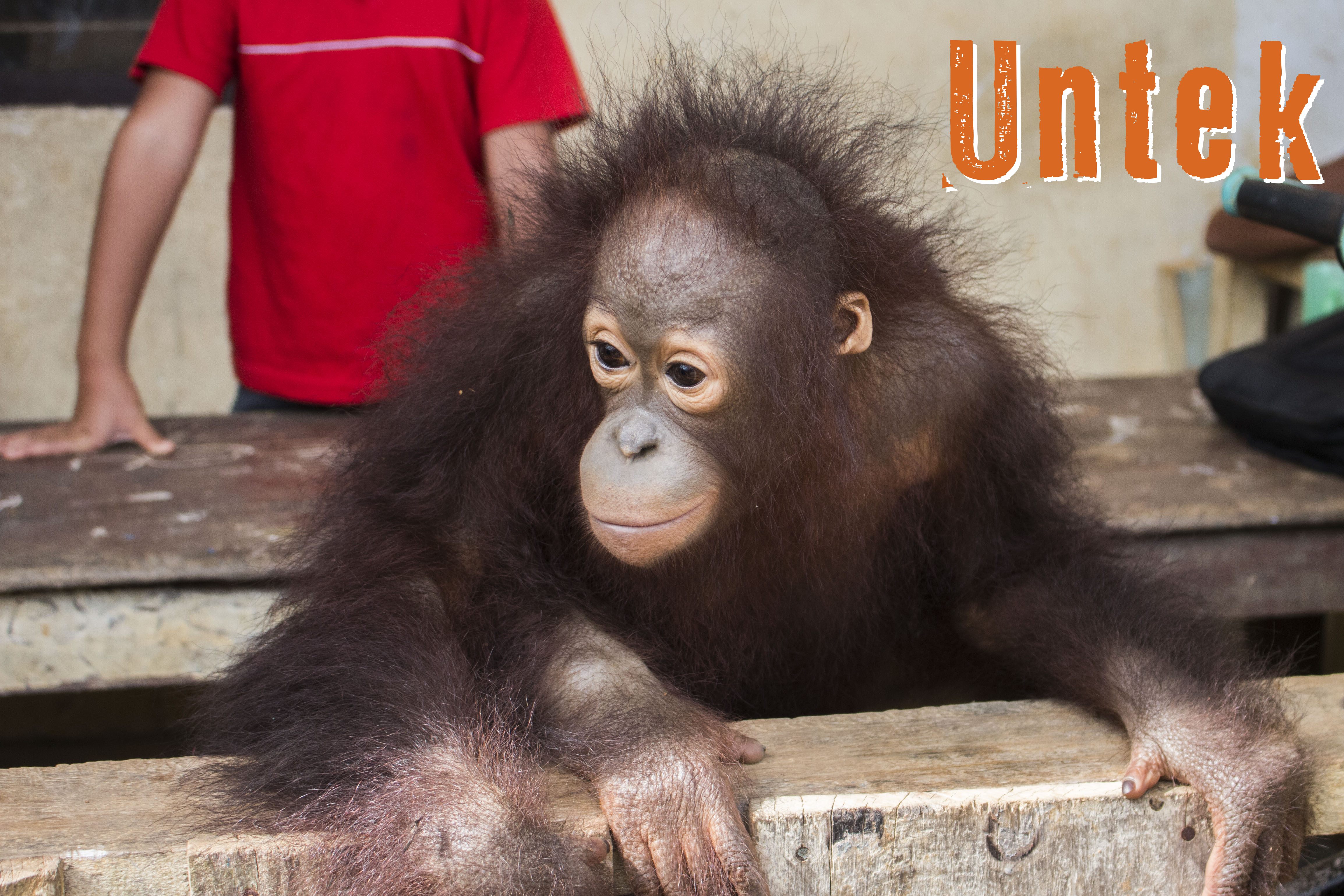 The second orangutan to be rescued that day was a male called Untek of about four years old. He was being kept as a pet in Matan Village, Nanga Tayap District in Ketapang. His owner, a man called Yudas, works at an oil palm plantation owned by the company PT SMP. He claimed to have been keeping Untek as a pet for the past four years. During this time Untek had been fed on human food such as bread, milk and biscuits.

Yudas said he had got Untek from a local man. He had built a small wooden cage for the orangutan at the back of his kitchen. It measured just 1m x 1.5m. Every day Untek was let out of the cage to play with the owner’s children. Our vets confirmed that Untek was suffering from malnutrition as a result of the unsuitable diet he had been living on for so long.

Both Teka and Untek were taken back to our centre and settled into the quarantine unit. During the next few days they will be given a thorough veterinary check up and a series of tests to check on their health. 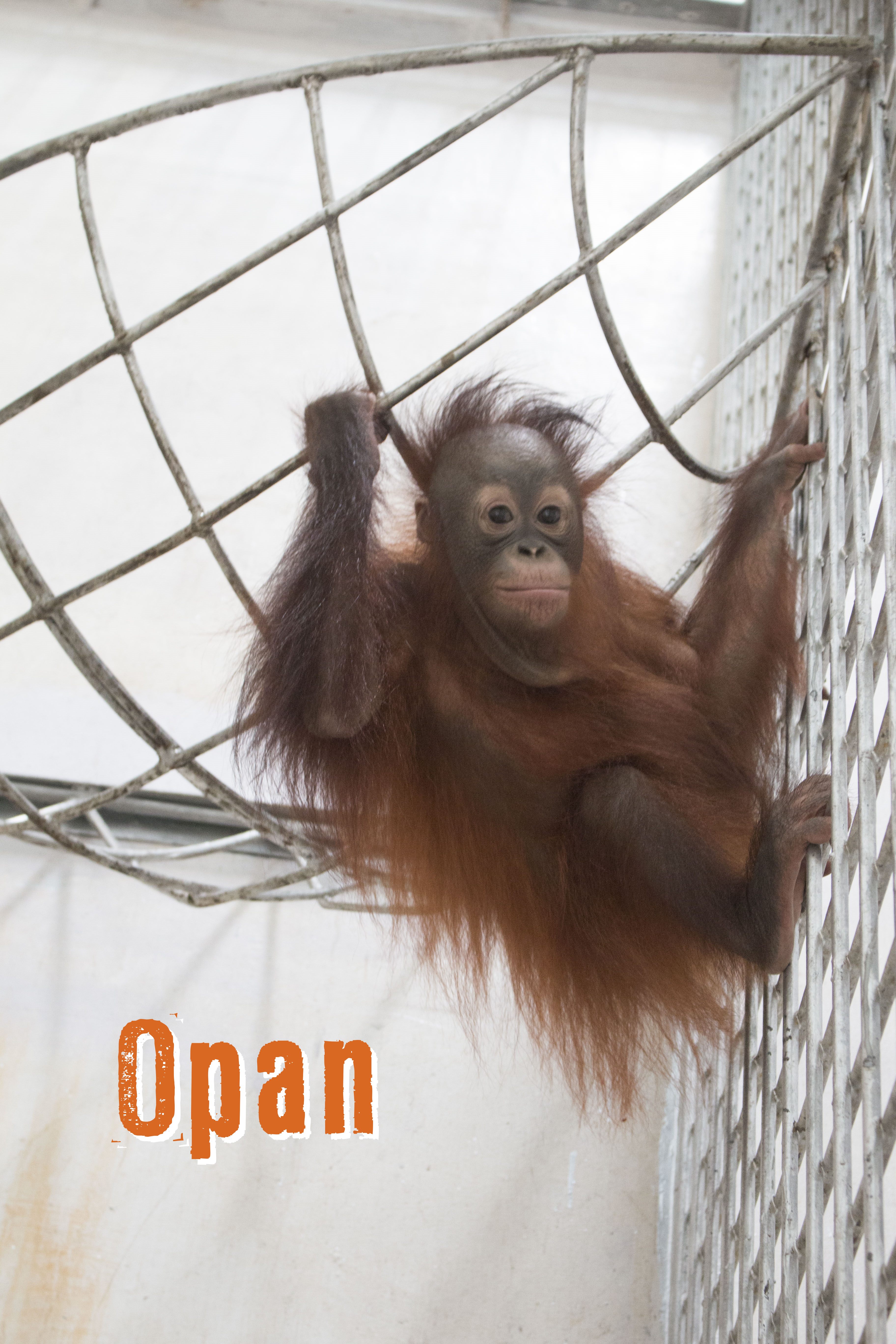 Just three days later a third orangutan was rescued by Argitoe, leader of our Human-Orangutan Conflict Team, and Hendra, a representative of the BKSDA. The one year old male named Opan was surrendered voluntarily by his owner after he realised that he was breaking the law by keeping a protected species as a pet.  He had apparently had the orangutan for about nine months after his previous owners could no longer afford to feed him.

Argitoe and Hendra collected Opan from Rasau Jaya District in Kubu Raya and brought the orangutan back to our rehabilitation centre in Sungai Awan in Ketapang where he joined new arrivals Teka and Untek in quarantine.

Although keeping an orangutan as a pet is illegal in Indonesia, it is not unusual for people to keep them as pets in the Ketapang District, particularly in remote areas far from the city centre. Inevitably, as long as people are keen to keep pet orangutans, there will be poachers and hunters prepared to supply them.

Destruction of the forest to make way for palm oil or other agricultural plantations leaves orangutans without food and shelter. They stray onto farmland and into nearby villages in search of food, exposing the adults to the danger of being killed as pests and leaving their babies to be captured and sold as pets.

During 2016 International Animal Rescue’s team rescued 12 orangutans from captivity, while already up to mid-March this year they have carried out four rescue operations with the BKSDA. The mothers of these baby orangutans have almost certainly been killed in order for their infants to be captured. In the wild a baby orangutan will stay with its mother until it is between six or eight years old. Until then the infants aren’t equipped to live independently and rely on their mothers for food, care and protection.

"It takes a long time and it is not always easy to rehabilitate an orangutan and prepare it for release back into the wild," said vet Adi Irawan, Operations Manager at IAR’s orangutan centre in Ketapang, West Kalimantan. "Baby orangutans require years to learn all the skills they will need to fend for themselves in the wild. It is also a very expensive process. We are currently caring for 110 orangutans in our rehabilitation centre and this places a huge responsibility on us in terms of care and cost.”

Karmele Llano Sanchez, Programme Director for IAR in Indonesia, stated: "It is high time people realised that, if they keep breaking the law by capturing orangutans and keeping or selling them as pets, then the species will soon become extinct.

“Anyone who is offered an orangutan certainly should not buy it. They should immediately contact the authorities and report the person trying to sell it. And if people persist in breaking the law by keeping protected wildlife, then the law must be enforced to discourage them and to deter the hunters who supply them.”