Johnny and Desi return to freedom in the forest

In cooperation with the Centre for Conservation and Natural Resources (BKSDA) in West Kalimantan and the Bukit Baka Bukit Raya National Park (BBBR NP), our team in Indonesia recently released two orangutans into the National Park in the district of Melawi, West Kalimantan (Indonesian Borneo.)

The two orangutans were Johnny, a male orangutan, and a female named Desi. Johnny is eight years old and was rescued in September 2011, while Desi is about ten years old and rescued in March 2012. Both were kept as pets until we rescued them.

Desi was first released back into the wild in May 2016. However our monitoring team subsequently reported that she was looking very unwell, possibly with malaria, and so she was recaptured and brought back to the centre for treatment. Once restored to health thanks to the expert care of the veterinary team, she was soon ready for release once more.

Johnny and Desi have both been at our Orangutan Conservation Centre in Ketapang for more than four years. They have undergone rehabilitation in "forest school" where they learnt to climb, forage, make nests and acquire a variety of other survival skills. Once they had mastered those skills, they were moved to the centre’s pre-release island.

The orangutans’ behaviour on the pre-release island confirmed that Johnny and Desi, who had once lived in a cage, were now able to climb, forage and make their own nests. "The two of them are in good condition and clearly able to fend for themselves. They are able to forage and find food for themselves and make a nest each night to sleep in. We are sure they will do well in their new home in the forest,” said vet Ayu Budi Handayani, IAR’s Animal Care Manager in Indonesia. 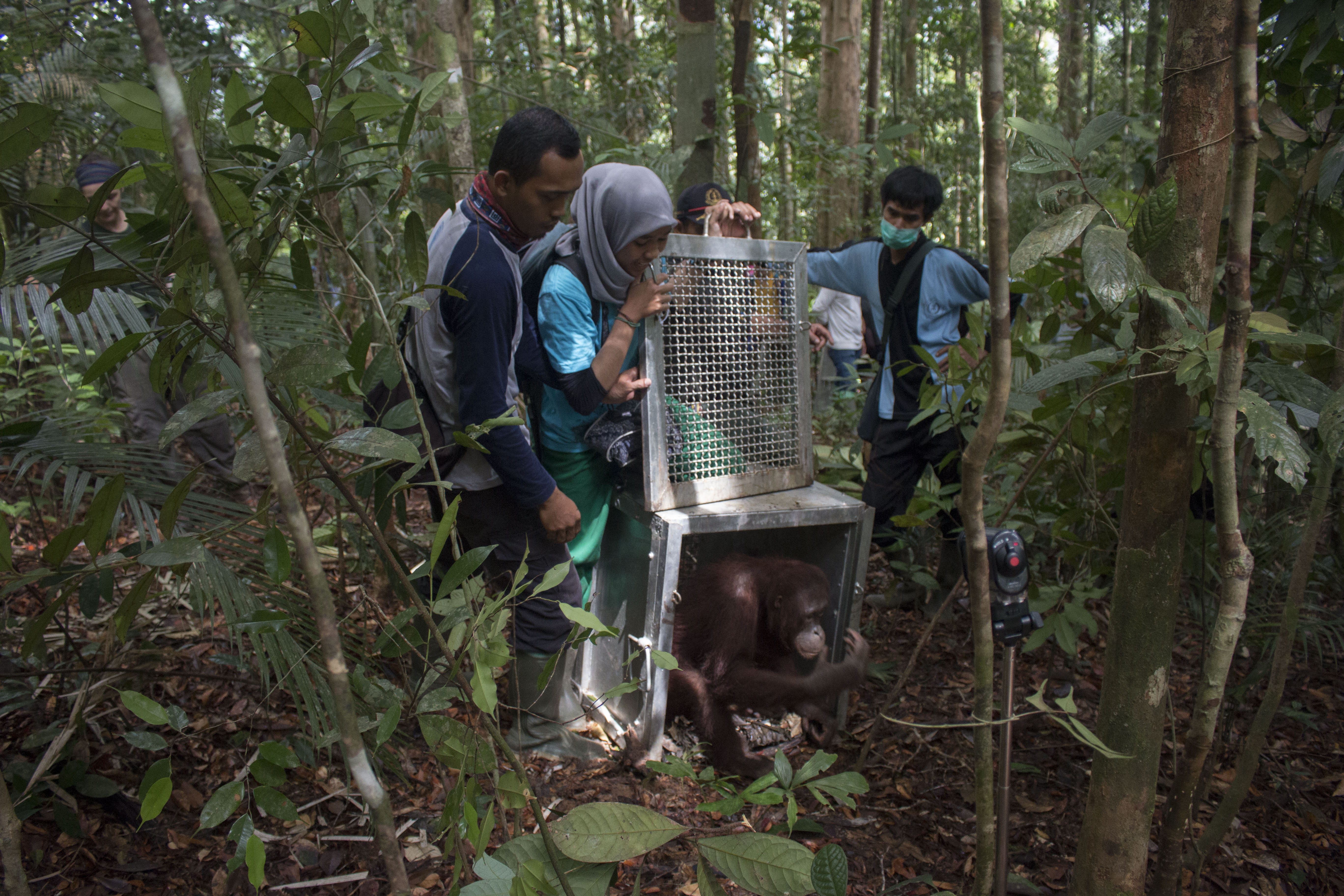 "The rehabilitation process is a long one. It can take seven or eight years," said Karmele Llano Sanchez, IAR’s Programme Director in Indonesia. "Being kept as pets for several years can have a very adverse effect on the orangutans’ mental and physical health. Luckily Johnny and Desi were saved in time but there are several orangutans in our care for whom our help came too late. We rescued them but it was too late for them to be rehabilitated. So sadly now they will have to stay in our rescue centre for the rest of their lives. "

Johnny and Desi’s long journey began on 23 November 2016 at 16.00 from our centre in Ketapang. The journey by car to reach BBBR NP took more than 40 hours. Then the team travelled by boat for about an hour and a half before continuing on foot. They walked for six hours into the forest in BBBR NP. When they were eventually released, Johnny and Desi immediately climbed into the trees and started to forage. 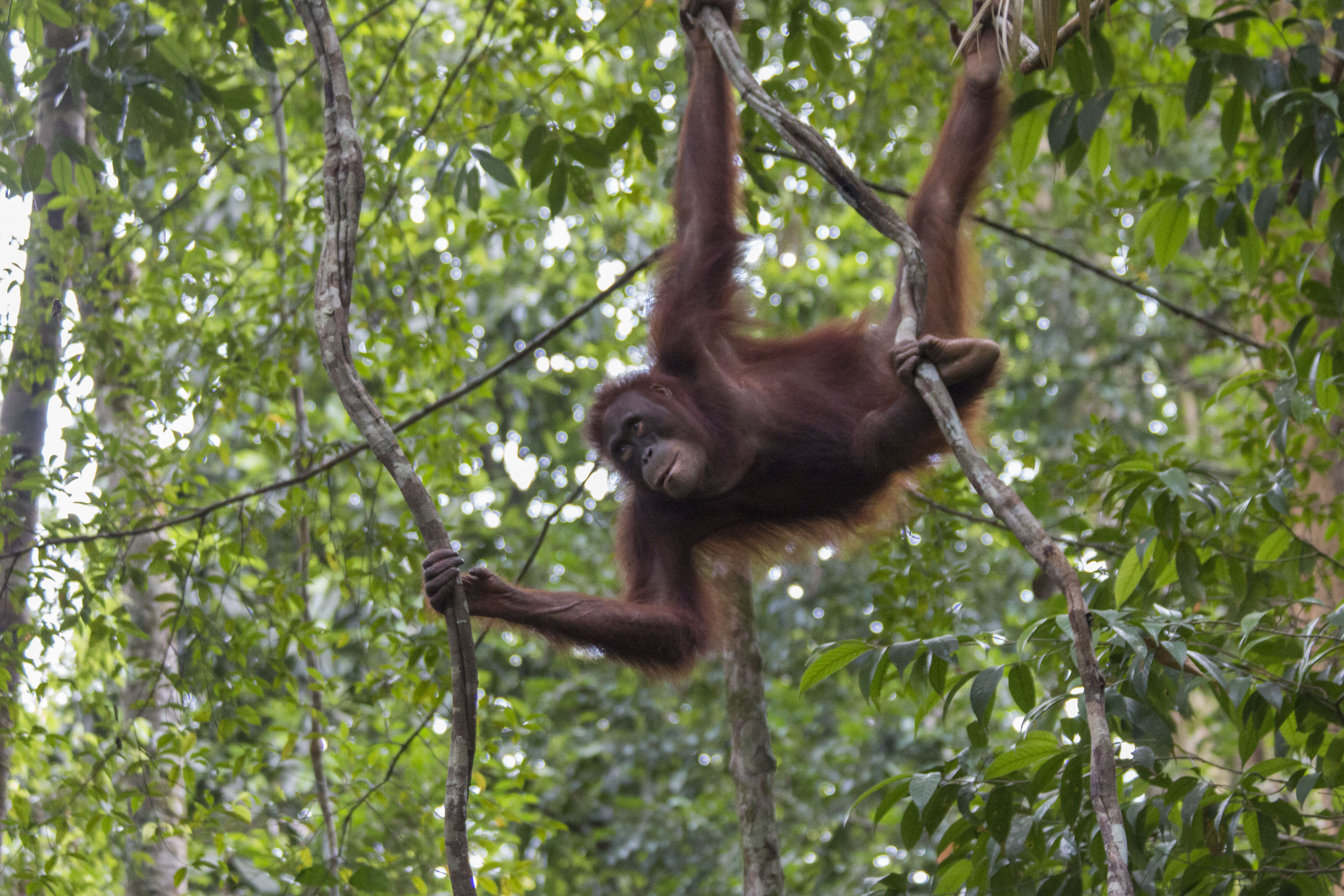 A monitoring team will now follow Johnny and Desi and observe their progress back in the wild. The team comprises several local people from the villages around the release site. They have already received training in orangutan behaviour and monitoring from the IAR team.  They will record the movements, activities and types of food eaten by Johnny and Desi. As well as the monitoring team, vet Sulhi Aufa is also out in the field with them to monitor the health of the orangutans and ensure they are surviving and thriving in the forest. To date IAR has released 11 orangutans in BBBR NP.

"The monitoring team is doing an incredible job," said vet Adi Irawan, IAR’s Operations Manager in Indonesia. They live in a camp in the forest, waking up early in the morning and only returning to the lodge when the sun has gone down. They follow the orangutans for almost 14 hours a day. "We are very pleased to see the spirit and concern for the survival of the orangutans among the monitoring team. We believe their presence will ensure the success of this release and a happy future for Johnny and Desi,” he added 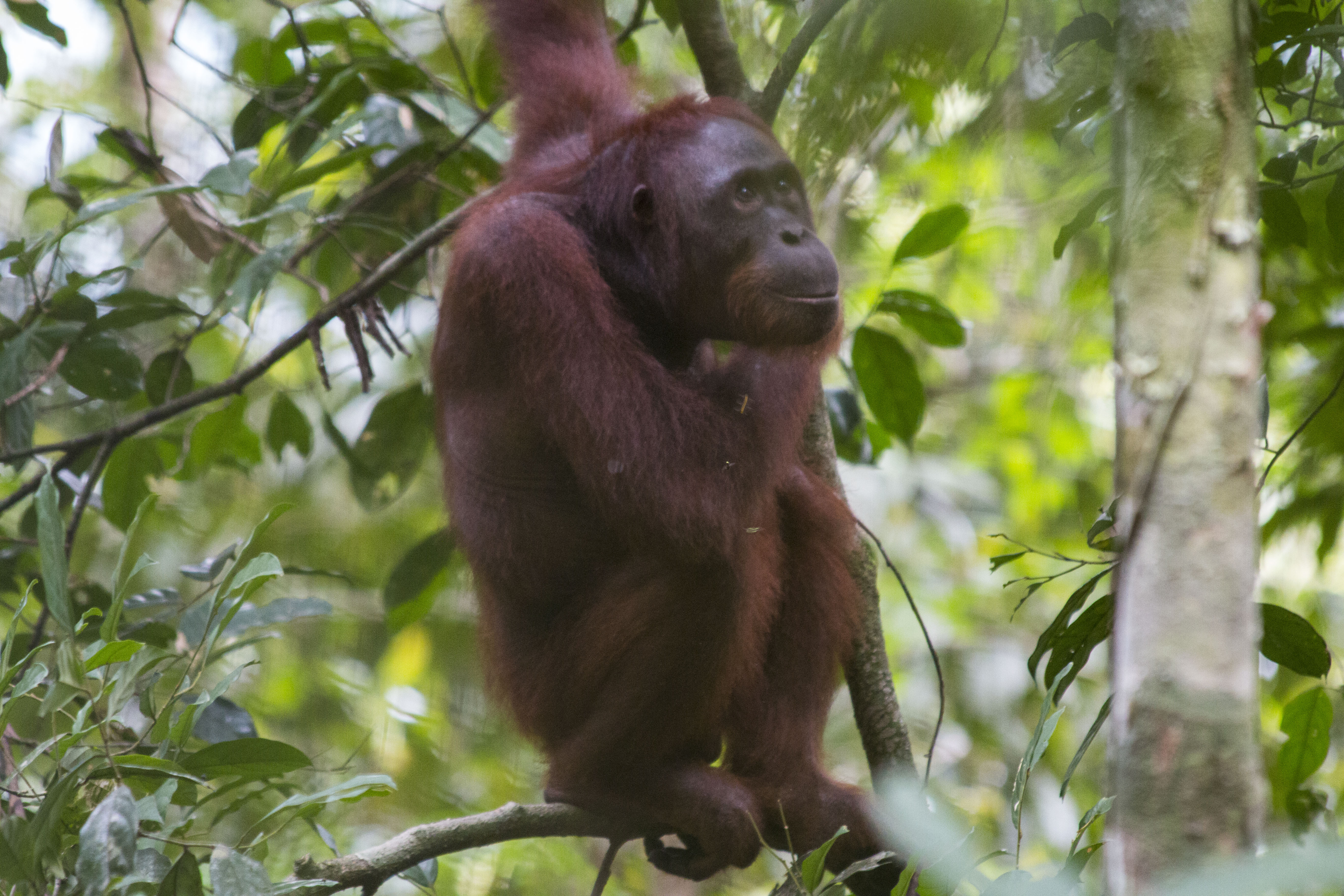 IAR’s centre in Ketapang is currently caring for more than 100 orangutans and we estimate that the number will continue to grow as more of their habitat is lost through forest clearing for plantations. Deforestation also makes it difficult to find safe release sites for the orangutans. In light of the rapid rate of decline in orangutan populations in the wild today, the International Union for Conservation of Nature (IUCN) recently reclassified the Bornean orangutan as Critically Endangered. Wild populations in Borneo have declined by more than 80% in the past 75 years, while the people of Borneo, particularly those living far from the city centre, still fail to understand the problem.

"We can’t imagine a bright future for orangutans if their habitat continues to be lost at this rapid rate. They are threatened by the clearing of forests, fires, and also the threat of being caught and sold as pets like Johnny and Desi,” added Karmele. “They will only survive when people start to take the problem seriously, although I fear it could be too late by then.”