Our IAR orangutan rescue team is being kept very busy with even more rescues. The forestry department (BKSDA) was made aware of the existence of a male orangutan in the region of Sungai Bengaras. Our team joined them on the long treacherous journey to collect the orangutan called Bujing. The team left Ketapang at 7.30am and drove along rough roads to the village Penyubung Sandai where they then had to get onto a speedboat for a two hour journey to the area Nanga Bengaras. Due to the poor road conditions and receding rivers the team finally arrived at their destination at 4pm.

The rescue team was very alarmed at the condition of the orangutan. Bujing was chained to the side of the house. He looked very thin and had no hair due to malnutrition, which had also impaired his growth.

Five years old Bujing, was being kept as a pet by Mr and Mrs Seda. They had bought him for 500 thousand RP (£30) when he was a tiny baby, as they loved animals. When he was small they would regularly bathe Bujing and give him milk, but as he grew they had to keep him on a chain to stop him going to the neighbours where he would eat their food. 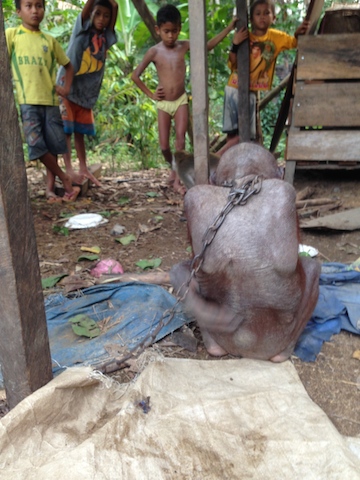 Bujing also had wounds on his back, which the owners said had happened two months ago when he had escaped. When he returned they noticed he had two deep wounds, which look as though they had been caused by a sharp object. At the time Bujing had not eaten for three weeks and the owner had treated his wounds with tobacco as traditional medicine. Though the wounds have now closed there is still visible inflammation.

Mr Seda was aware it is illegal to keep an orangutan as a pet and willingly surrendered Bujing. As the transport cage was not permitted on the boat, Bujing travelled as a passenger with our rescue team. He is very accustomed to humans so was very calm and well behaved, wrapping himself in a blanket to keep warm. The rescue team arrived back in Ketapang 2pm the following day where Bujing has been housed in a large quarantine cage while he is under medical supervision 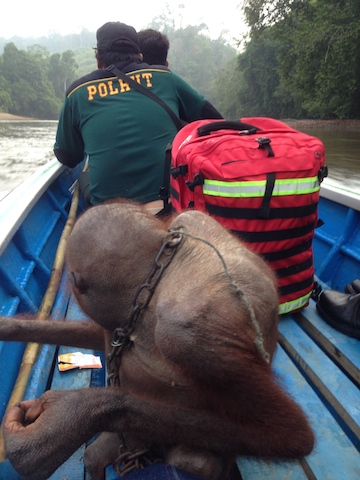