As a member of the Asia for Animals Coalition, IAR has signed up to a letter in support of proposed zoo legislation designed to improve the welfare of captive animals in Korea. The bill was proposed on 27 September by Chang Hanna, Member of the National Assembly’s Environment and Labour Committee.

Recommendations by the AfA include incorporating minimum welfare standards into national zoo legislation and requiring the inspection and licensing of zoos, aquaria, circuses and private collections keeping wild animals in captivity.

The AfA also recommends that captive animals are provided with the opportunity to display normal behaviours, are able to live in appropriate social and family groups and have areas to which they may retreat from the public eye. Facilities should be available to allow separation of animals where necessary and at all times animals should be protected from conditions detrimental to their well-being and appropriate husbandry standards adhered to.

Establishments should be required to develop protocols to ensure the condition, health and behaviour of all animals is assessed daily by the person in direct charge of their care and a daily record kept indicating changes to the prescribed diet, health checks carried out, any unusual behaviour or activity or other problems, and remedial actions taken. 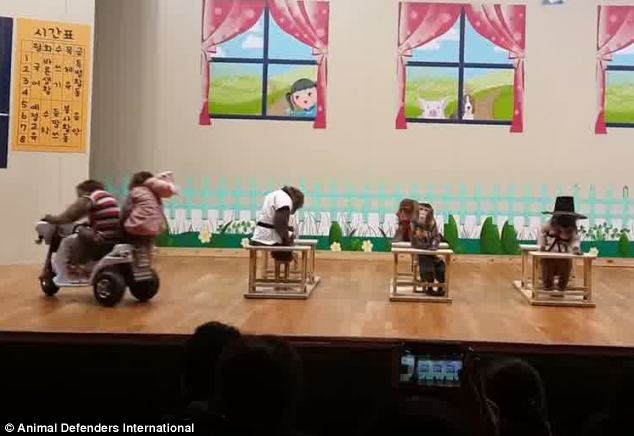 These monkeys have endured barbaric treatment behind the scenes to ensure their tricks are faultless. Above, the monkeys ride on a scooter and sit at desks

Alan Knight OBE, Chief Executive of International Animal Rescue, said: “The proposed bill is a definite step in the right direction: now we must encourage the Korean Government to make the legislation as comprehensive and effective as possible in improving the welfare of captive animals in Korea.”

Legislation should require captive wild animal facilities to implement capacity building staff training in animal management to ensure the provision of conditions and facilities above any minimum animal welfare standards set by a licensing system.

The AfA coalition supports the development of a management committee to implement the national zoo legislation and to develop an inspection and auditing process. This will allow management problems to be identified at an early stage before they have a serious negative impact on the health and welfare of animals and will facilitate the implementation of new management regulations to address such issues.

The licensing and subsequent registration of all captive wild animal facilities will also aid dissemination of information and subsequently aid the management of establishments for the benefit of animal welfare, conservation, education and research. Establishments operating illegally or persistently not meeting the minimum standards can be closed to the public and procedures developed for the subsequent care of the animals.