International Animal Rescue Saving animals from suffering around the world
Home » News » Utat, the pet orangutan saved in the nick of time in Borneo

Utat, the pet orangutan saved in the nick of time in Borneo

An orangutan living loose as a pet in Borneo among a family’s children and domestic dogs would soon have been chained up or confined to a small cage if she hadn’t been rescued. Utat had been kept as a pet for more than four years by a family in Lubuk Batu Village, Simpang Hilir District, Ketapang. Our orangutan rescue team made a six hour drive from our centre in Ketapang to rescue her.

The owner said that he had found the baby orangutan crying alone on land cleared for a palm oil plantation. He claimed to have felt sorry for her and so took her home and kept her as a pet. He named her Utat.

The man made a wooden cage for Utat but she wasn’t kept locked up in it. Instead she was left loose all day to play outside with the local children and dogs. Sometimes she would climb the tree in front of the owner’s house. Then, in the evening, she would go back to her cage. She was fed on a human diet and apparently her favourite meal was salted fish and rice.

However, according to our vet Ayu Budi Handayani, Utat’s freedom was about to come to an end. She explained: “I accompanied the team on the rescue and saw Utat’s situation for myself. It was obvious to me that her owner was becoming wary and even scared of her. He no longer wanted to hold or handle her for fear she would bite him. If we hadn’t rescued her when we did, in my opinion it wouldn’t have been long before Utat was chained up or shut in her cage, like so many other sad orangutans that we have found living as pets in West Kalimantan (Indonesian Borneo.)

“Utat was suffering from very sparse hair and dry, flaky skin – and she also smelt very bad. This was no doubt a result of her diet: the poor creature was mostly fed on rice and salted fish, or rice on its own, flavoured with monosodium glutamate (MSG.)” 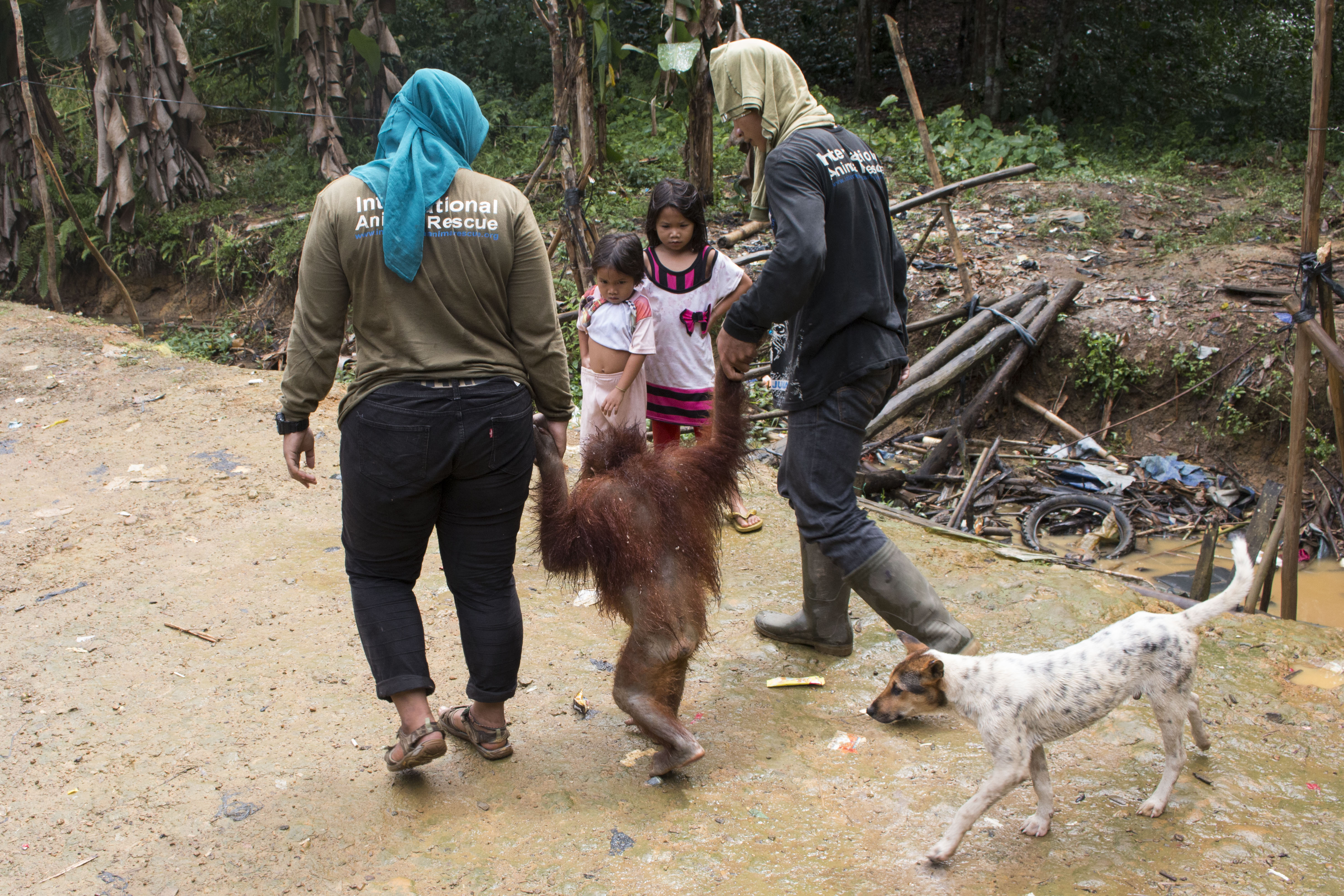 Utat is now in quarantine at our orangutan rehabilitation centre in Ketapang.  At first she suffered a great deal of stress because she had never been confined to a cage before. However the team is paying her frequent visits and giving her plenty of attention because she has been so accustomed to human company. She is also being given a plentiful supply of enrichment to keep her occupied.

“She is very smart,” says Ayu, “and she loves being given lots of leaves and foliage to keep her busy. We hope she will soon start using the leafy branches to make a nest inside the hammock in her cage. Already she is eating fruits and vegetables and we hope this will soon make her look and feel better.”

Once she comes out of quarantine in another six or seven weeks, Utat will join the other orangutans in forest school and her rehabilitation can begin. It is too early to tell how long her rehabilitation will take. That will depend on her ability to adopt the natural behaviours of a wild orangutan. Having been without her mother since she was a tiny baby, she has never been taught the skills she will need to survive in the wild. Now she will have to learn from the other orangutans, with plenty of encouragement and coaching from the team of vets and caretakers at the centre.

Says Alan Knight OBE, IAR CEO: “Utat is at the beginning of a long journey back to the wild. But we are hopeful that, like most of the orangutans in our care, she will eventually be able to return to her home in the forest and live as nature intended.