The two latest orangutans to be rescued from captivity by IAR’s team in West Borneo had both been captured from palm oil plantations. They were then both kept chained up as people’s pets.

Our team rescued Jamila, a female of about two years old, at the end of February. She had been kept in captivity for about a month, having apparently been found alone on a plantation. 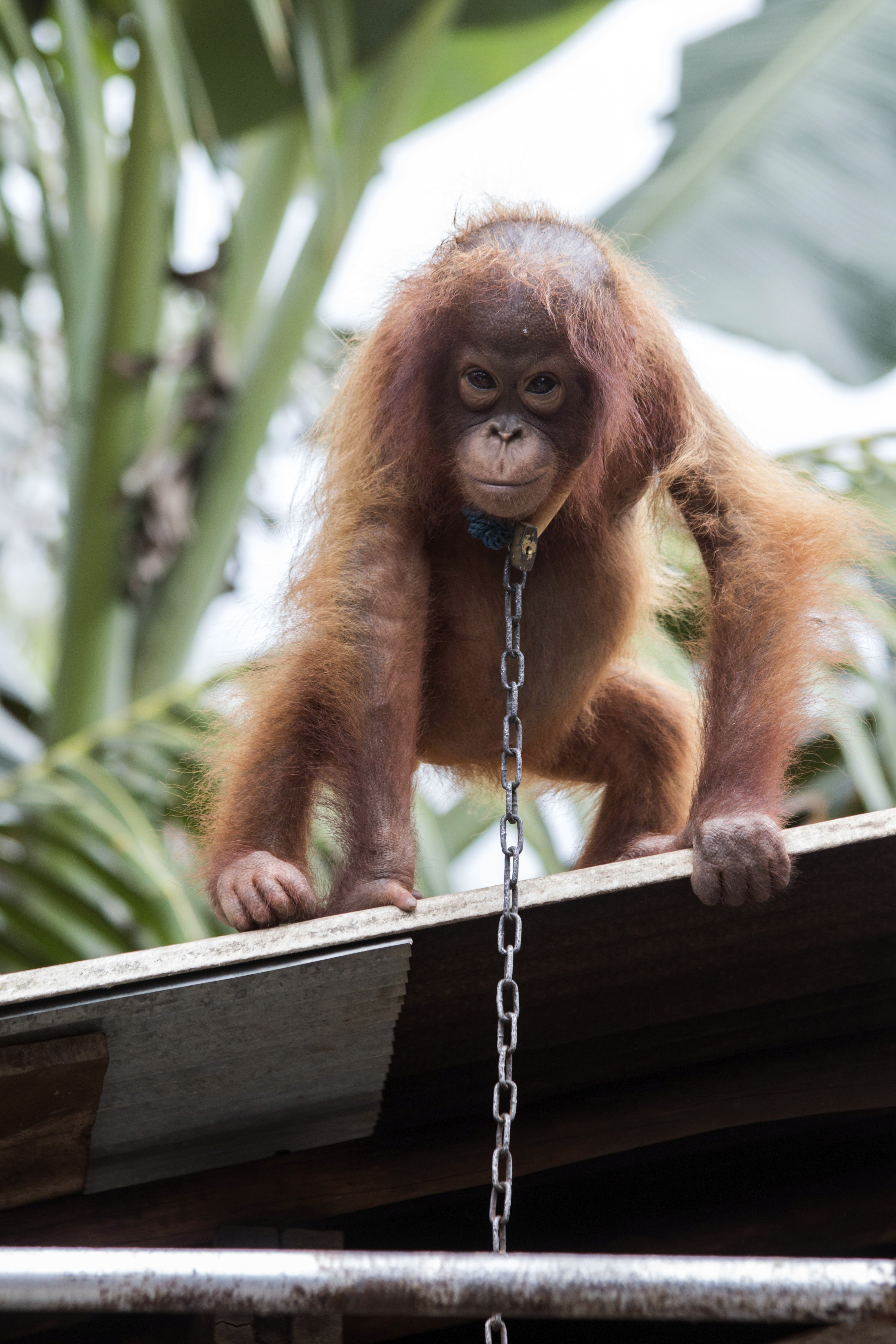 Her owner, who claimed to have bought the young orangutan from a friend for about US$95, kept her chained up by the neck. The chain was tied to a stake next to a wooden cage of about one metre square. When our team arrived to rescue her the key to the padlock was nowhere to be found and they had to cut through the chain to release her.

Jamila’s owner had been feeding her on rice, chilli, chicken, tea, coffee and other entirely unsuitable human food. Having only been kept in captivity for a month, Jamila is still wild. This will stand her in good stead when she is returned to the forest. In the meantime, however, it makes the situation stressful for her and makes life difficult for those trying to help her. She stays away from people as much as she can and does her best to bite anyone who tries to touch her.

Jamila is currently in quarantine at IAR’s rescue centre where it is hoped she will soon settle down and come to realise that the vets and keepers at the centre mean her no harm. Although handling the young orangutans is kept to a minimum, a certain amount is required in the early stages to help the babies adapt to their new environment and learn to socialise with each other.

The team rescued the second baby orangutan on 11 March. She is also a female of about three years old named Cuun. 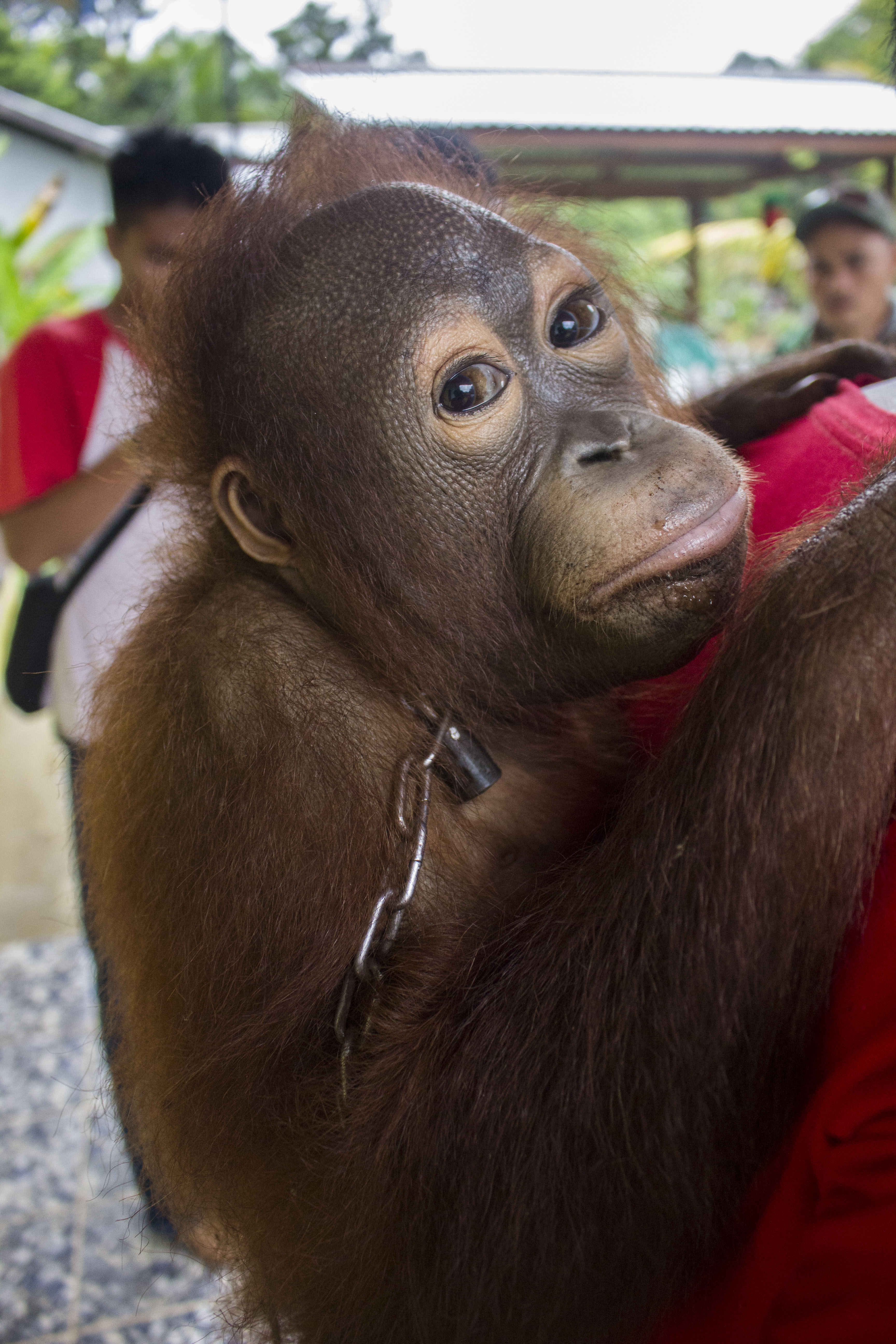 Apparently Cuun was found in 2013 on land that had been cleared for palm oil plantations. Her owner, Akasius, claimed to have come across her while he was looking for wood for his small furniture business. He maintained that the little baby’s mother was nowhere to be seen and so he decided to bring Cuun home. He fed her on condensed milk and then, when she grew bigger, he gave her rice and other human food. When she was a small baby Cuun was kept in a cage, but eventually the cage broke and so Akasius resorted to chaining her up by the neck.

Cuun has joined Jamila in quarantine at our centre in Ketapang.

Alan Knight, IAR CEO, says: “It is highly likely that these two young orangutans are orphans because no mother orangutan surrenders her offspring without fighting to protect it. Every time a baby orangutan is taken from the forest, we can assume that a mother’s life has been lost. Both Jamila and Cuun have almost certainly suffered the trauma of being brutally torn from their dead or dying mothers to be sold as someone’s pet.

“Jamila has spent only a month in captivity and the poor creature is still wild and traumatised by her capture. Cuun on the other hand, after three years in captivity, has become resigned to a lonely life on a chain, a far cry from the forest where she was born.”

“The physical and psychological damage that has been done to these two orangutans so early in their short lives will take years to repair. The rehabilitation process to prepare them for release back into the forest is a long and costly one. But orangutans continue to pay a heavy price for the rampant destruction of their forest home and we owe it to them to try to make things right.

“We can’t give these babies back their mothers but we do aim eventually to give them back their freedom by releasing them into a safe, protected forest where no further harm can befall them.

“Only last week we released two adult orangutans back into the wild and it was incredibly uplifting for everyone to see those magnificent apes return to their rightful place in the forest.”