Our partners Wildlife SOS (WSOS) in India have rescued a bear cub found wandering alone with a badly injured foreleg. The little sloth bear has lost her left paw, probably to a poacher’s snare. She is now receiving treatment and care in the IAR-funded bear rescue centre in Bhopal, Madhya Pradesh.

The female cub of about three months old was rescued after locals in Amoni village, Bhopal alerted the Forest Department to her presence. She had been making frequent visits to the village in search of food and was becoming progressively thinner and finding it more and more difficult to walk because of her mangled foreleg.

The Range Officer at Van Vihar National Park took the call and contacted Dr Niraj Dahe of WSOS at the Van Vihar Bear Rescue Centre. The facility, funded by IAR and Free the Bears Australia, is home to 28 rescued dancing bears and provides them with a peaceful and pain-free retirement after years of pain and neglect on India’s streets.

The rescue team acted swiftly to track down the cub and catch her before she fell prey to a larger animal. Her injured limb would have made her an easy target for predators lurking in the forest. 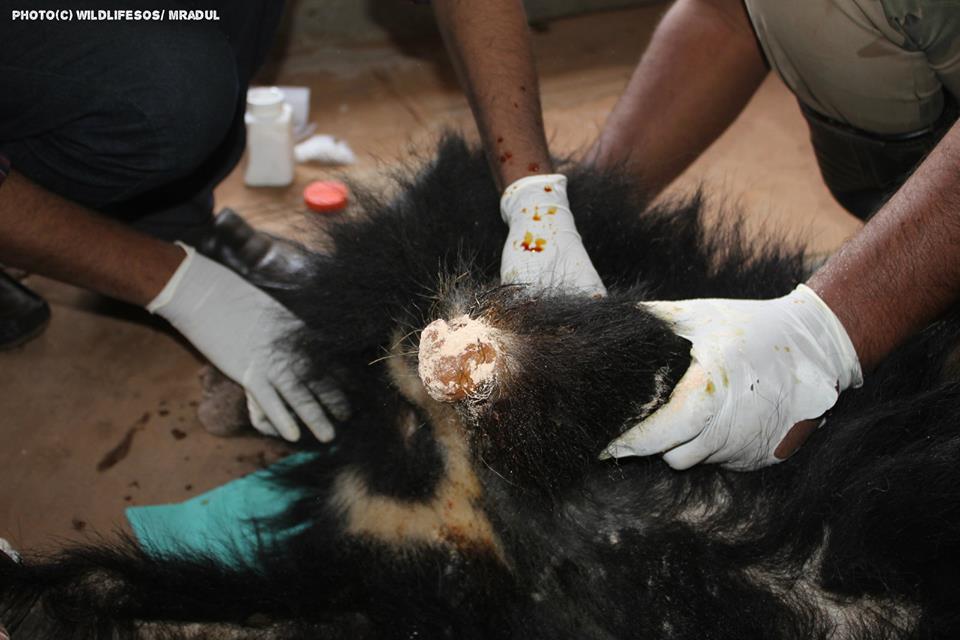 When the team found her the terrified cub was shaking violently. Tragically, her left paw was found to have been severed, possibly by a leg trap or a poacher’s snare. Initial examinations revealed that the wound was severely infected.

“Our primary focus was to prevent any secondary infection, so we put the cub on antibiotics and are treating and dressing the wound daily,” Dr Niraj said. “We’re giving her some time to settle into her new surroundings, as she is currently extremely traumatised and very frightened.”

A video clip below shows the little cub, named Rose by her carers, struggling to walk by using her long snout as a crutch in the place of her missing forelimb.

Alan Knight OBE, IAR CEO, says: “The sight of this little cub trying to walk is just pitiful. She must have spent weeks in agony, from the moment when she was caught in the snare and every single minute since then. The pain from the infected wound must have been excruciating.

“In addition, this poor baby is without her mother who should still be protecting and caring for her. We will never know what happened to the mother bear but Rose’s story illustrates how vulnerable wild bears are to threats from poachers, wildlife traders and smugglers.  Her escape from the snare may have cost her a foreleg but it probably saved her from an even more gruesome fate. Wild bears in India are much in demand for their body parts or to be smuggled further afield for bear dancing or baiting.

“This little one may have suffered permanent physical damage but I know the veterinary team and the keepers at the centre will do all they can to help her cope with her disability and live a long and happy life in their care.”

Kartick Satyanarayan, Co-founder of Wildlife SOS, said: “The villagers were right to inform the Forest Department, rather than taking matters into their own hands and we are grateful to them for alerting us to the situation. It is truly heart-breaking to see this innocent animal in such pain and I hope to see her recover from this traumatic experience, with the help of our dedicated team of vets and staff.”