This was the message sent out by an outstanding seizure operation carried out by the Special Criminal Investigation Directorate of West-Java Regional Police. The operation successfully stopped a syndicate of wildlife traffickers planning to smuggle 34 protected Javan slow lorises, two civets and one protected tortoise in Bandung, the capital city of West Java.

The successful investigation has resulted in the arrest of five people - three hunters and two dealers - allegedly involved in the crime. Under Indonesian law, hunting, capturing or keeping slow lorises as pets is strictly forbidden. However, hundreds of these animals are still sold openly every day in animal markets throughout Indonesia.

In a press conference held after the operation, Mr Diki Budiman, Assistant Director of the Special Crime Unit of Polda, West Java, said: "The modus operandi of these criminals begins with the hunters who capture the animals from the wild. Then they sell the lorises to dealers for just £3. The dealers then sell them for £12.50 - £31. ”The lorises are then sold online, via Facebook and other social networks. Social media is a new method that is being used increasingly by animal traffickers.

Our team in Indonesia quickly arrived on the scene and carried out a check up of the confiscated slow lorises: “A few of them have already had their teeth clipped, the rest seemed fine,” said Nur Purba Priambada, the Veterinary Coordinator at IAR’s Primate Rehabilitation Centre in Bogor, Java. “Several of them have wounds, probably from bites, and they are all extremely stressed.” The rescue team immediately evacuated the 34 lorises to the Rehabilitation Centre for further treatment.

The Javan slow loris is included in the IUCN Red list of the 25 most endangered primates of the World. Still being a very low profile species, every year hundreds of them are sold in markets. In 2014 the IAR centre received a confiscation of 238 slow lorises in one shipment. Numbers in the wild are being massacred as a result of the illegal trade in wildlife as pets. 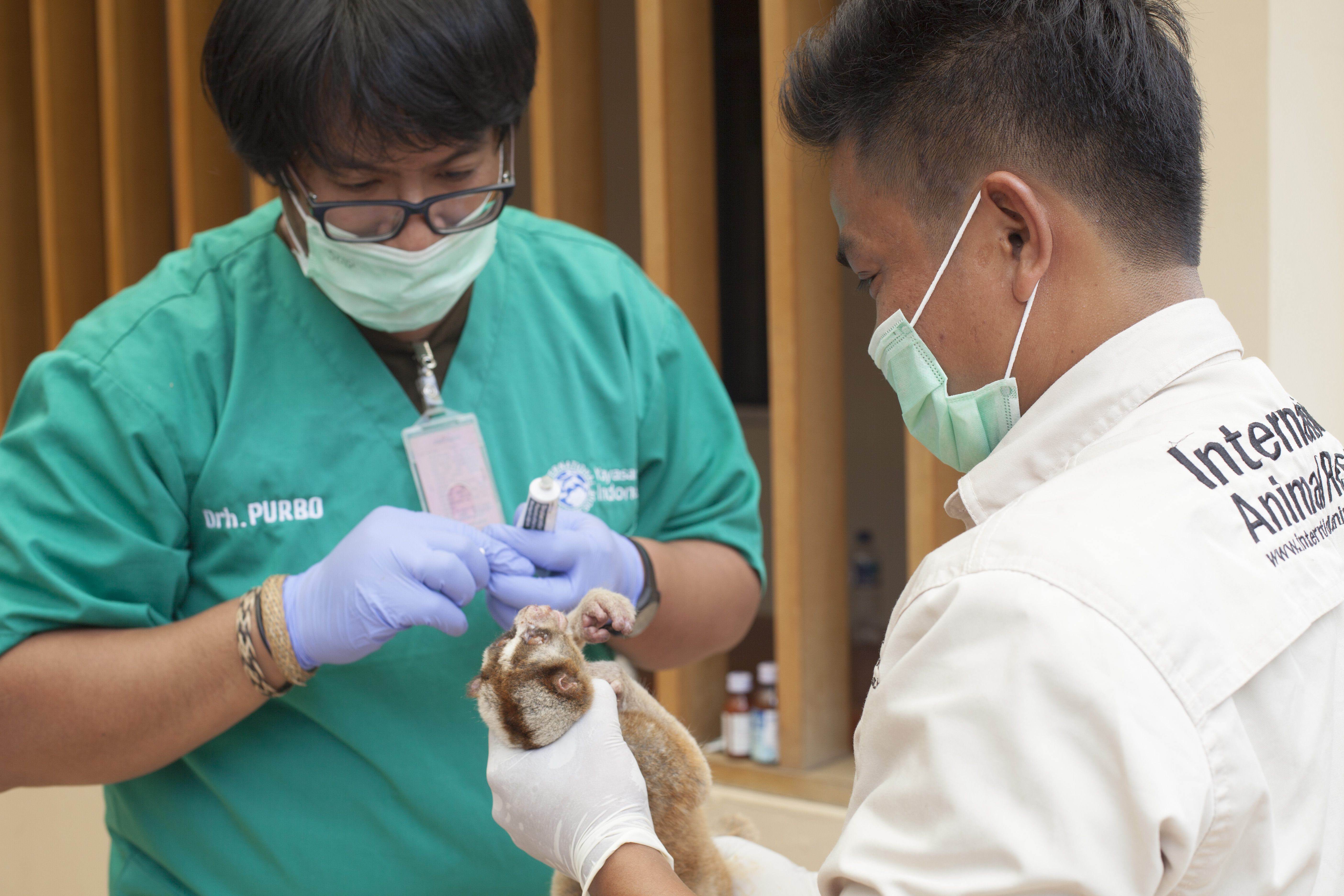 ​"Animal trafficking is a major animal welfare issue causing unbearable pain to millions of animals worldwide,” said Karmele Llano Sanchez, Programme Director of IAR Indonesia. "Stopping these syndicates is crucial for the survival of so many endangered species, including the slow loris. We applaud the efforts of the authorities on this highly successful operation.”

According to a recent article in the UK’s Guardian newspaper, illegal wildlife trade is valued by the UN Environment Programme at $23bn (£18bn) a year and responsible for the decline of thousands of species now on the brink of extinction.

"All the lorises will have to go through a quarantine process in which they will receive close medical attention,” said Wendi Prameswari, Animal Care Manager at our centre in Bogor. “They need very intensive treatment and care during the first few days in particular and often some of them succumb to the high stress levels, infections, and injuries received during capture, packing, transportation and selling.” Traders usually pack the lorises in small cramped boxes and transport them for long distances to their selling point, ending up in the homes of people who mistreat them. "Many of them do not make it through the process and the ones that survive and are rescued, like these ones, will still have to follow a long rehabilitation process until we find suitable places to release them. Even after release we will continue to monitor them to ensure they survive,” Prameswari added. 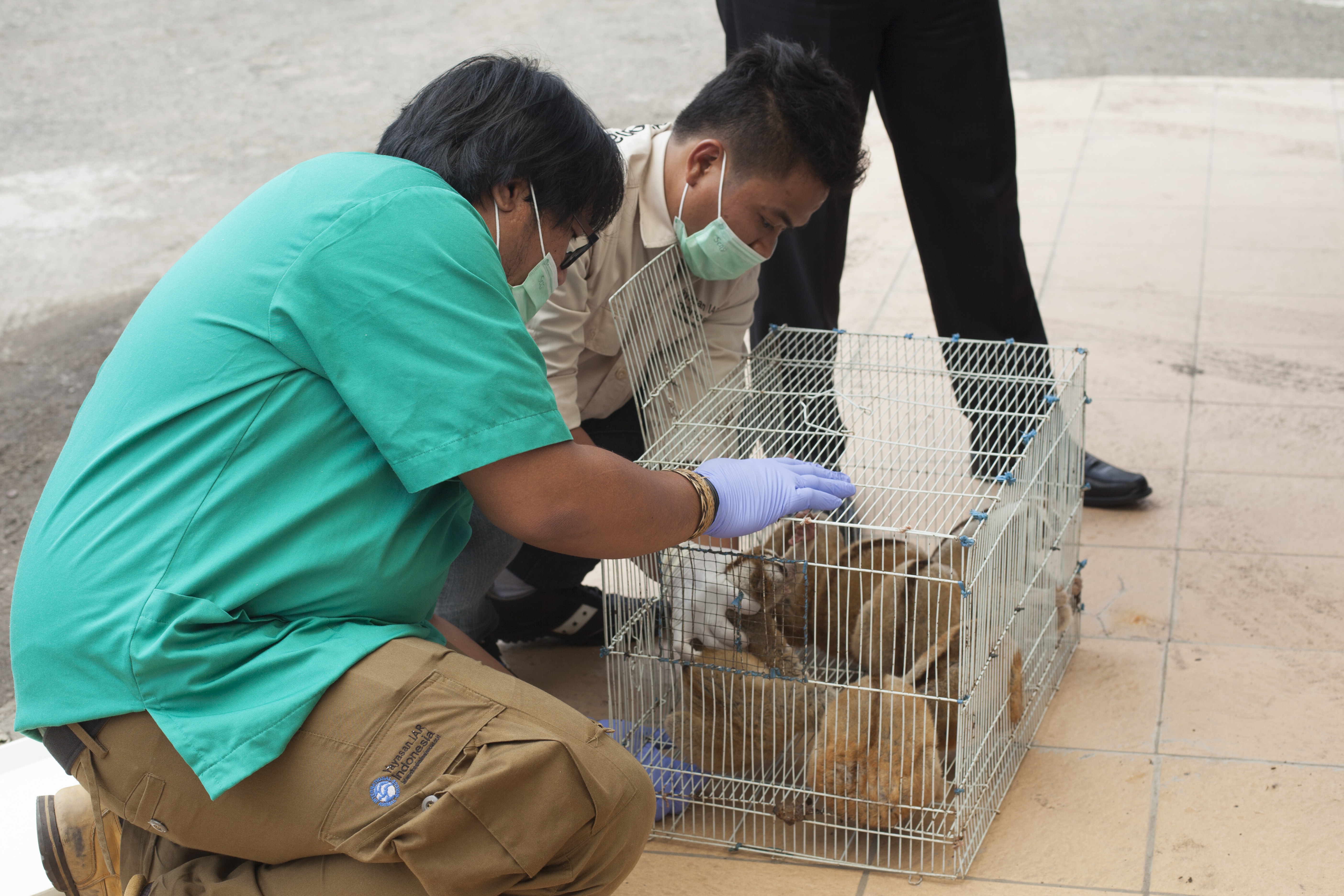 Our team in Bogor will now be working round the clock to save the lives of as many of the rescued lorises as possible. Rescuers, veterinarians and experienced animal keepers will ensure every one of the 34 lorises has the best chance possible of recovery and eventual return to the wild.

“Illegal wildlife trade must be tackled on all levels, from the hunters to the buyers who drive the demand," said Tantyo Bangun, Chairman of IAR Indonesia. "It’s only thanks to the efforts of local authorities like Polda Metro, who take the issue of animal trafficking seriously, that we can have hope for the future of slow lorises and other unique biodiversity.

“It is now up to all of us to campaign to help save the slow loris before it is too late.”