International Animal Rescue Saving animals from suffering around the world
Home » News » Our team in Ketapang rescues an orangutan after police...

A pet orangutan is now in the care of our rehabilitation centre in Ketapang after our rescue team was forced to enlist the help of the local police and forestry department to persuade the owner to part with her.

The orangutan in question was a three year old female called Bianca. She was being kept by a couple - Haerul and Puri Ayu – in the village of Randau Jungkal, about five hours’ drive from IAR’s orangutan centre in Sei Awan, Ketapang. We had originally been alerted to her existence in 2015 and immediately sent members of the Human Orangutan Conflict Response Team (HORCT) to verify the information.

The rescue team found Bianca in the couple’s home. However, when asked to surrender her, her owner refused to do so unless she received compensation for the costs of caring for her pet, even though she was aware that it was illegal to keep an orangutan in captivity in Indonesia. 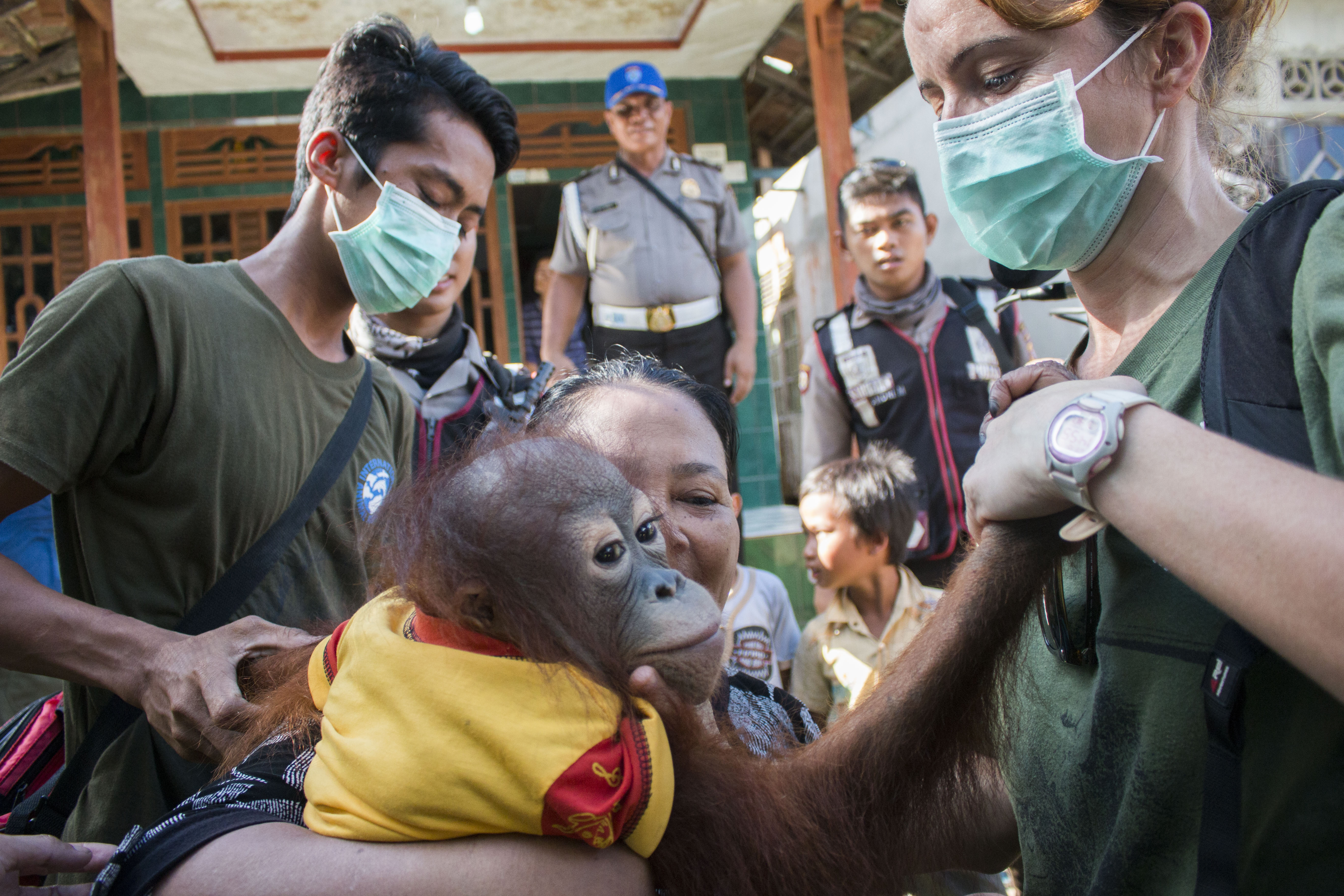 After all efforts to change the owner’s mind proved fruitless, the team had no choice but to enlist the help of the local police and forestry units. Finally, with their support, the team returned to the village to collect Bianca.

However her owner still showed great reluctance to relinquish the orangutan.  The rescuers explained to her that although Bianca was currently quite small and sweet-natured, in the next few years she would become stronger and wilder.  Once she became difficult to handle, the orangutan would eventually be chained up, locked in a cage – or even killed.

The owner claimed to have bought the orangutan in February 2014 from someone in the village of Beginci. She said: "I found the orangutan chained to a tree outside someone’s home. I felt sad to see her there and bought her for Rp. 500,000 (£31)." 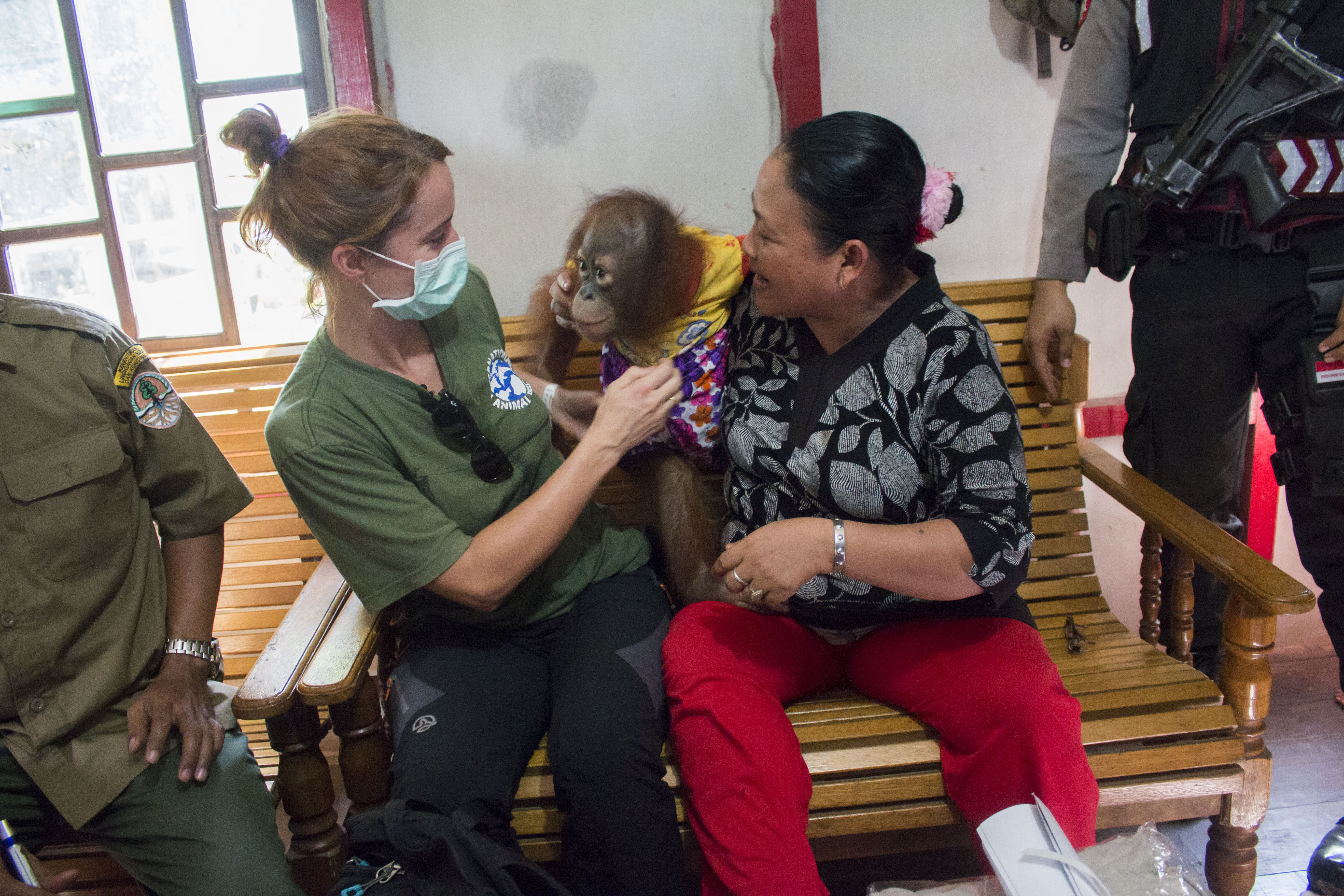 Bianca lived in the couple’s home and was treated like a child. She went everywhere with her owner, ate the same food and even slept with her.

After a great deal of discussion, agreement was finally reached with her owner. Bianca was divested of her clothes and placed in the transport crate on the back of a pick-up truck. The HOCRT Team then drove back to the centre where she was given an initial veterinary check up and settled into her quarantine quarters. When she has had time to adjust to her new surroundings she will be given a complete medical examination to ensure she is fit and free from diseases. Once she has completed the quarantine period, she will be introduced to some of the other rescued orangutans and her lengthy rehabilitation can begin.

Karmele Llano Sanchez, Programme Director of IAR Indonesia, said the swift response of the police to the report on this case should be appreciated. She said: "We are very grateful to the police in Ketapang and Sandai who helped rescue the orangutan and raise awareness of the issues within the local community.

"In addition to society’s lack of knowledge of conservation laws, poor law enforcement also serves to aggravate the problem. Therefore the role of the police and relevant agencies is absolutely vital.” 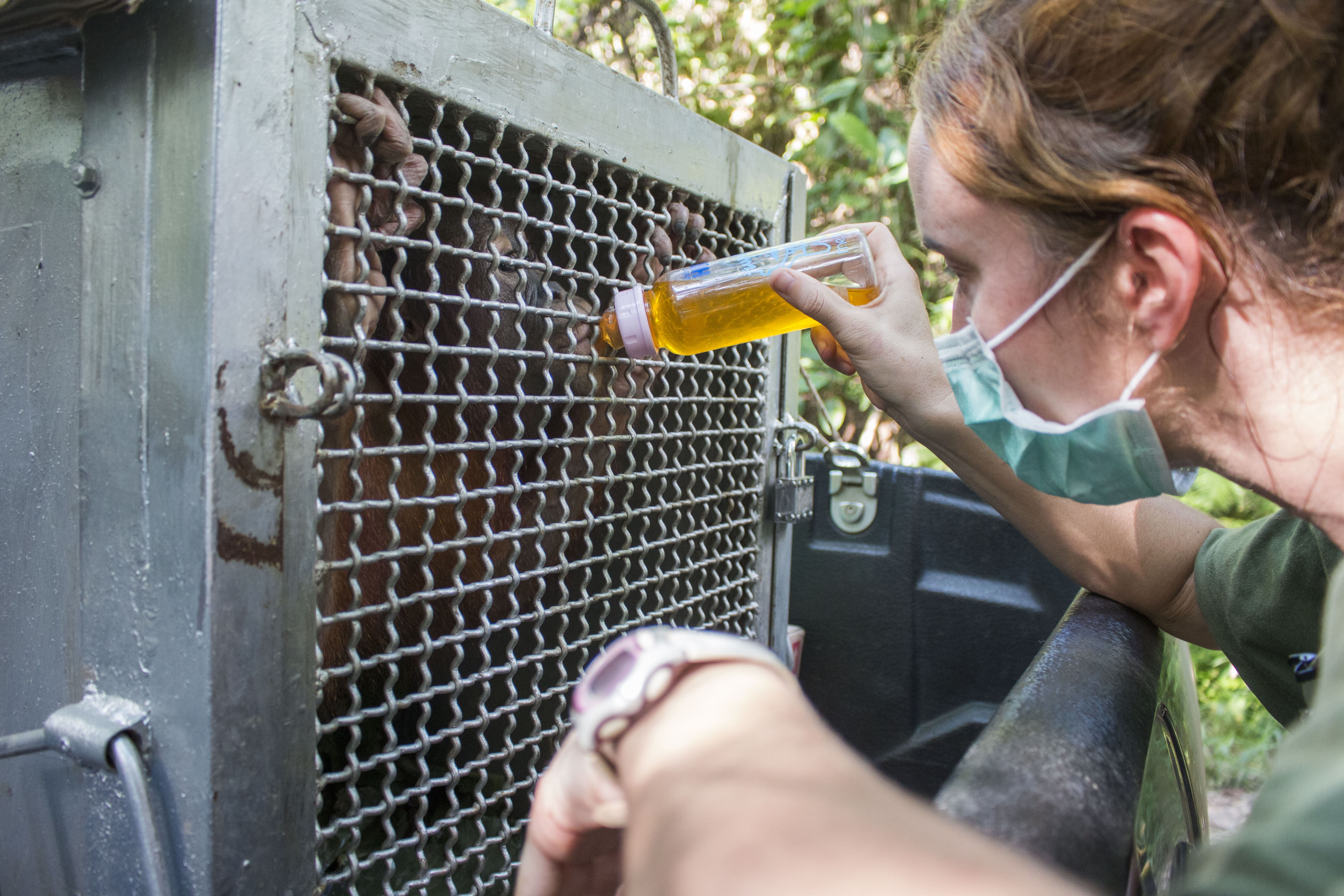 Earlier this year, in response to the rapid decline in orangutan populations, the International Union for Conservation of Nature (IUCN) reclassified the Bornean orangutan as Critically Endangered.  The population has declined by more than 80% in the past 75 years and yet the people of Borneo, particularly those living far from the city centre, have little if any understanding of this issue.

So far in 2016, IAR’s team in Indonesia has rescued ten orangutans that were being kept as pets in the Ketapang area.  In every case one can assume that the mother has been killed, since normally a baby orangutan will stay with its mother until it is between six and eight years old.