International Animal Rescue Saving animals from suffering around the world
Home » News » Our medical team in Indonesia treats the wounds of a...

Our medical team in Indonesia treats the wounds of a seriously injured wild orangutan.

The veterinary team at our orangutan conservation centre in Ketapang has performed surgery on an orangutan suffering from injuries that were probably inflicted when he was caught from the wild.

Nakanas, a five year old adult male, was rescued on 22 July from Kendawangan. The local forestry department (BKSDA) informed our team that some residents wished to hand over a wild orangutan which they had captured in a net after finding him in their community garden. They had forced him into a small iron cage and left him there for two days before notifying the authorities. When the BKSDA arrived at our centre with the orangutan, he was naturally terrified and aggressive. To minimise his stress he had been transported to the centre in the same small cage. 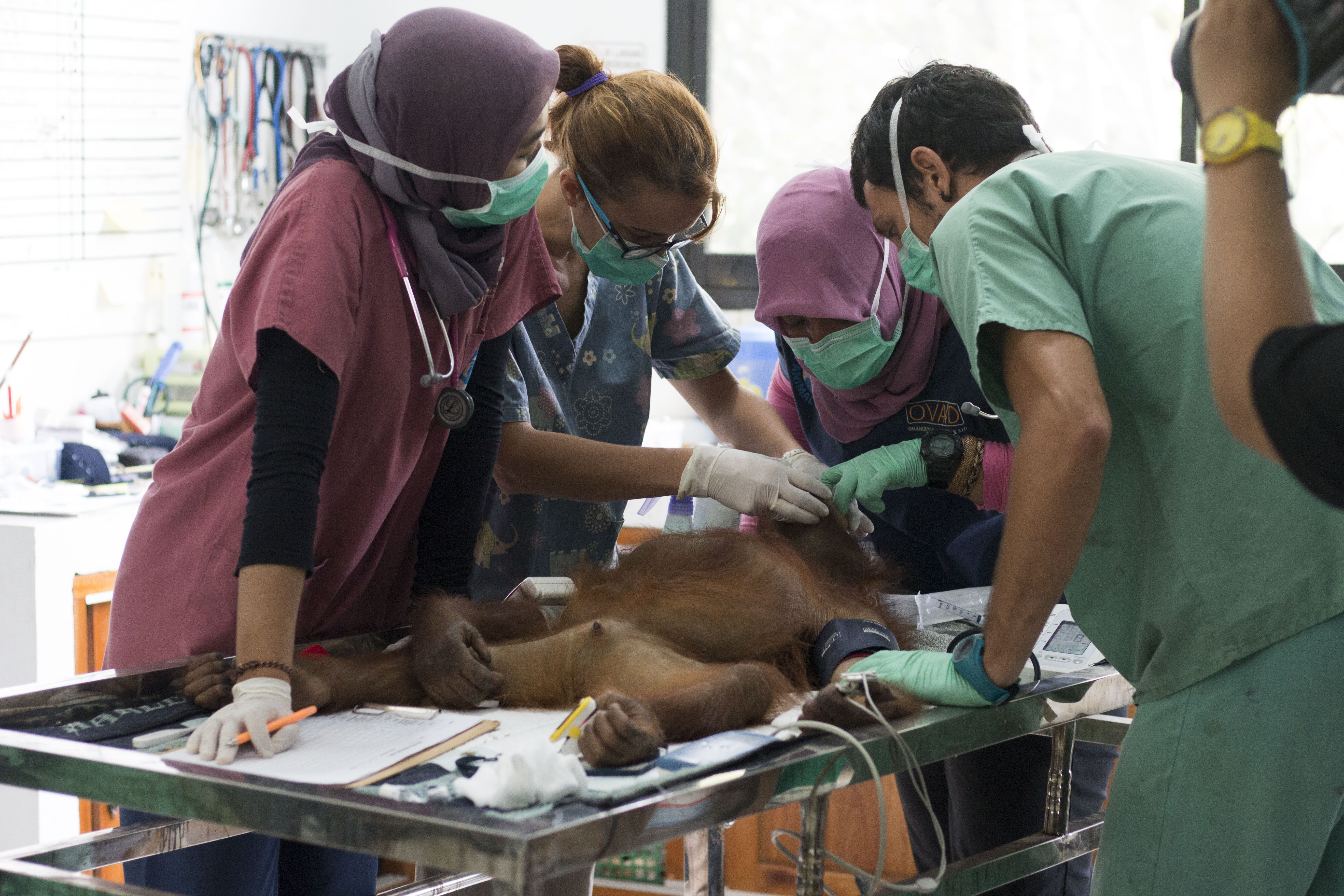 Nakanas was placed in the quarantine section of our centre where, unsurprisingly, he remained very wild and aggressive. He would eat only bananas and tender vegetables and, when he was anaesthetised for his medical check up, the reason for that soon became clear.

When they examined Nakanas’ mouth, the vets were shocked to discover that his lower jaw bone was exposed, his gums were torn and detached and his incisor and canine teeth were missing. There were also wounds to the right-hand side of his lips. These injuries could have been caused by friction, pressure or blunt trauma to the lower jaw, resulting in the teeth and gums being forced apart. There were also small scars and peeling skin on his hands and feet. The vets suspect that these terrible wounds may have been inflicted when Nakanas was captured and dragged along the ground in the net.

The orangutan was also found to have two wounds on his left hand that seemed to have been caused by a sharp object. One of the cuts was particularly deep and granulation tissue was starting to form on them both.

Blood tests confirmed that Nakanas was suffering from anaemia and low levels of albumin in the blood, probably as a result of injury through trauma in the gums and malnutrition. The vets were also concerned that exposure of the jaw bone in the oral cavity could have led to a bone infection (osteomyelitis.) 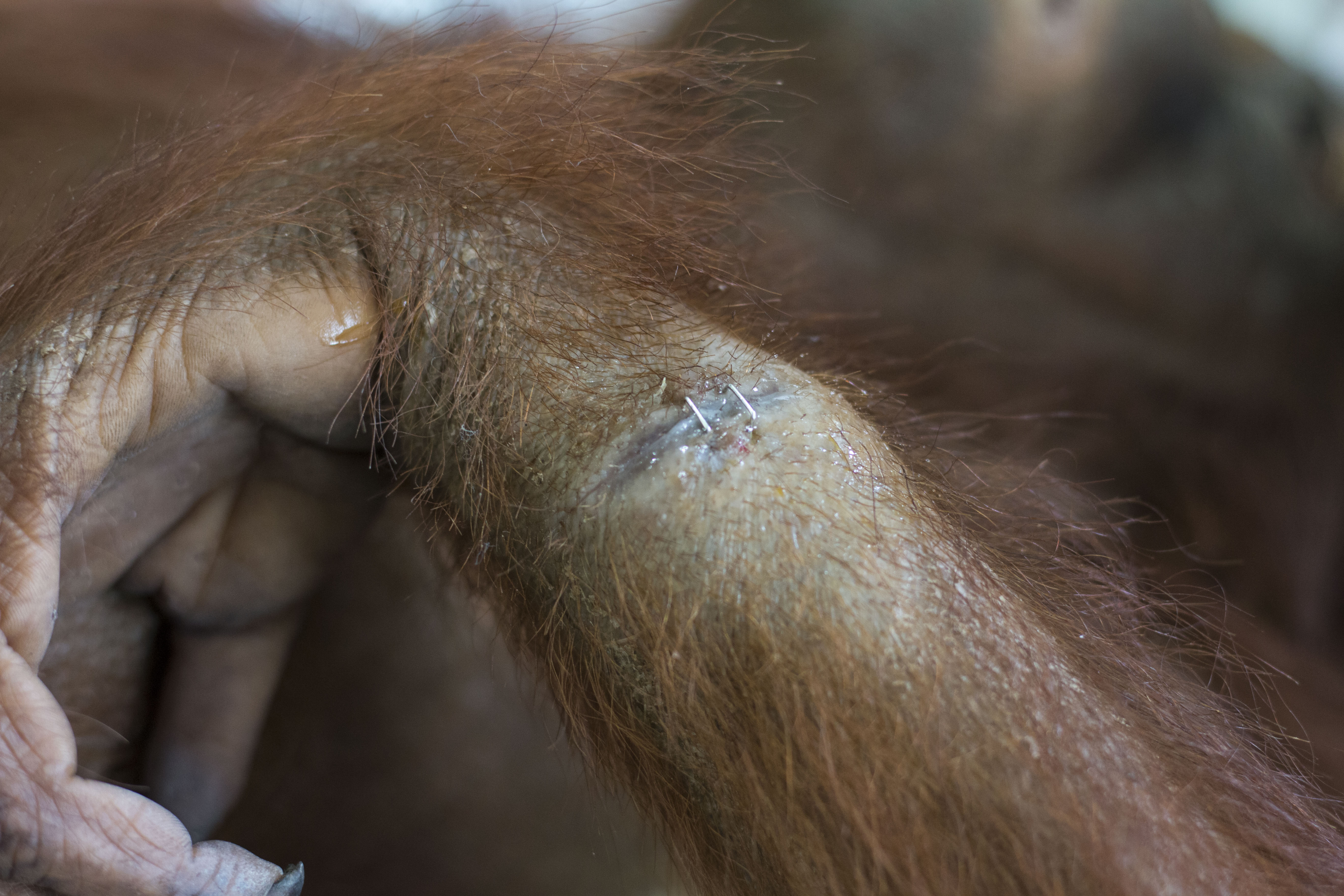 Nakanas was immediately started on a course of antibiotics, anti-inflammatories and painkillers. He was also given iron supplements and put on a nutritious diet to build up his strength. X-rays of his head and jaw were taken before the veterinary team painstakingly stitched up his gums to cover the exposed bone in the oral cavity. The wounds on his hands were cleaned and stapled.

IAR vet Ayu Budi Handayani said: “I’m pleased to report that Nakanas is making a good recovery from his wounds. He is still receiving treatment but his condition is already much improved. He is also gaining weight now that he is able to eat without pain and discomfort.

“He is still wild and aggressive which is important if we are going to release him back into the wild later this year. For the moment, all the signs are encouraging and we hope that, after such a traumatic and painful experience at the hands of human beings, Nakanas can eventually start his new life in a safe and protected forest far from human habitation.”