Orangutan "Kaliba" released into a protected forest in Ketapang.

In early March the IAR team in West Kalimantan released an orangutan, "Kaliba", who had been rescued in January from a coconut plantation in Kali Baru, near the IAR orangutan centre in Ketapang. You can see details of Kaliba's rescue here.

This orangutan had reportedly been entering local plantations in the area for the last few years. The region had suffered massive deforestation to give place to agriculture in the last year, making it very difficult for Kaliba to find enough food to sustain himself. Therefore, the need for his rescue and translocation was essential to save him from a very bleak future, ending in starvation.

When the rescue team arrived, Kaliba did not seem to mind the presence of people around him. It indicated that he had been living around people for quite some time. The local people were very friendly to the orangutan, and were quite concerned that he might not make it for very long in the area as food was scarce and the rapid deforestation had left Kaliba with almost no room to live.

After the rescue Kaliba had to stay for some time in quarantine at  International Animal Rescue’s Orangutan Rescue and Rehabilitation Centre. In March, the Medical team got everything ready for his release into a protected forest in Ketapang area, Gunung Tarak Natural Reserve. Gunung Tarak reserve is a forested area of about 17,000 ha connected to the large forest of Gunung Palung National Park. The local villagers of Cali and Pangkalan Jihing know all the names of the orangutans released there by IAR. The people respect orangutans and would not harm them.

Gunung Tarak is a five hour drive from the centre, so it was decided to move Kaliba through the night as the temperature is much cooler and the roads are much quieter. At nine o’clock in the evening the medical team sedated Kaliba. This is done to keep him calm and stress free during his checks and transportation. Darting by blowpipe in the dark is no easy task!  He was then weighed and measured and put into a transportation cage where he woke up. Kaliba remained calm as his cage was loaded onto a truck and at midnight the team started their long drive to Gunung Tarak, the area that was to be Kaliba’s new home.

The following morning IAR’s team were met by a group of local men who assisted with the arduous task of carrying Kaliba in his cage through the forest to a suitable release site. The men walked for hours, bare foot, in the heat and humidity carrying over 120kg.  "These people are amazing, they carry this heavy weight on their shoulders bare foot and smoking a cigarette at the same time... - said Karmele L Sanchez, Project Director of IAR Indonesia - "we are very glad that people surrounding this area are so friendly. It is vital that we work together with the local communities, the future of orangutans and other biodiversity is in their hands" – she added.

After four hours trekking in the forest, the team arrived at the location. The cage was placed in front of a durian tree in such a way that cameras and people could witness Kaliba leaving the cage and climbing the tree in his first steps of freedom. As the door was opened, he had other ideas and went on ground level further into the forest before climbing another tree, where he paused and looked back at the release team before setting off into his new home.  It was a very emotional moment for the team to see Kaliba leaving the cage and regaining his freedom. “It's what it makes all worth it to see an orangutan that otherwise would have died, being able to have a second chance at life" - said Christine Nelson, Veterinary Adviser at IAR Indonesia. "Kaliba would not have survived if our rescue team had not been able to rescue him". 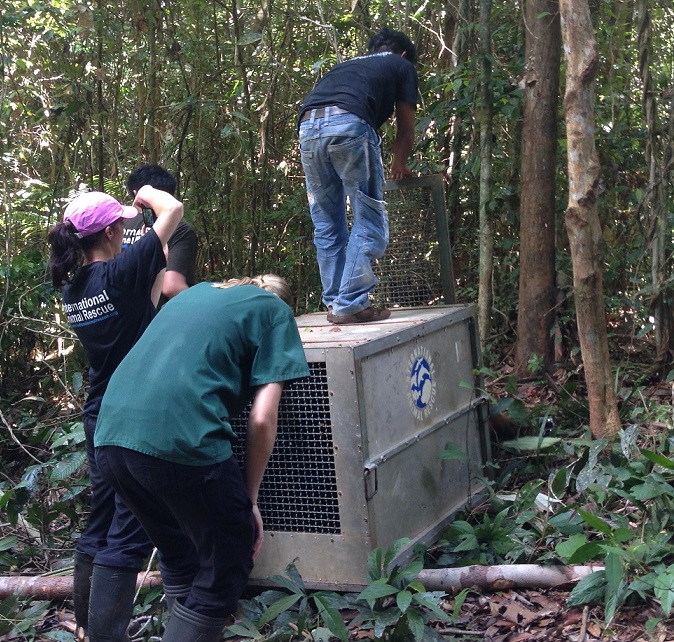 Kaliba is just leaving the cage in picture 1. In picture 2 he is to the right, venturing off into the forest before climbing up a tree

Rapid deforestation is costing the lives of many orangutans and populations are declining at an alarming rate. "Forest and habitat loss is increasing the risk of conflict between humans and orangutans - just in the area where Kaliba was found, our team has already rescued more than 10 orangutans in the last few years when orangutans were forced to enter villages or local plantations in search of food," explains Karmele. "Protecting habitat is of paramount importance to try to save the orangutans and the IAR team is not only working on rescue and rehabilitation efforts in Ketapang, but also working towards the protection of orangutans in the wild by working with the local communities".

You can watch Kaliba’s release on Nat Geo Wild’s “Orangutan Rescue: Back to the Wild” . Screening on 23rd June at 8pm (UK only, we will post news of other screenings shortly).

Please help us to rescue, rehabilitate and release orangutans in borneo by making a donation.