Orangutan Amy rescued from life in a small wooden box

Our Human Orangutan Conflict Team in Ketapang has rescued an orangutan that was being kept chained up as a pet in a small wooden crate after they were alerted to her existence by local group Yaysan Palung. Our team was accompanied on the rescue operation by officials from the local forest department (BKSDA) and then transported the orangutan to our rehabilitation centre.

The team found Amy slumped dejectedly in the crate. Sheets of corrugated iron had been nailed across the slatted sides, so all she knew of the outside world were the sounds of people passing by.

Although there was little room for her to move or stand up, Amy was chained up to make doubly sure she didn’t escape. The heavy chain was fastened so tightly that it had worn a painful wound in the back of the orangutan’s neck.

Her owner claimed that Amy had only been in the crate for a month – and that previously he had kept her in his house - but her limbs and backbone were so bent that it is possible that she had been there for longer than that. 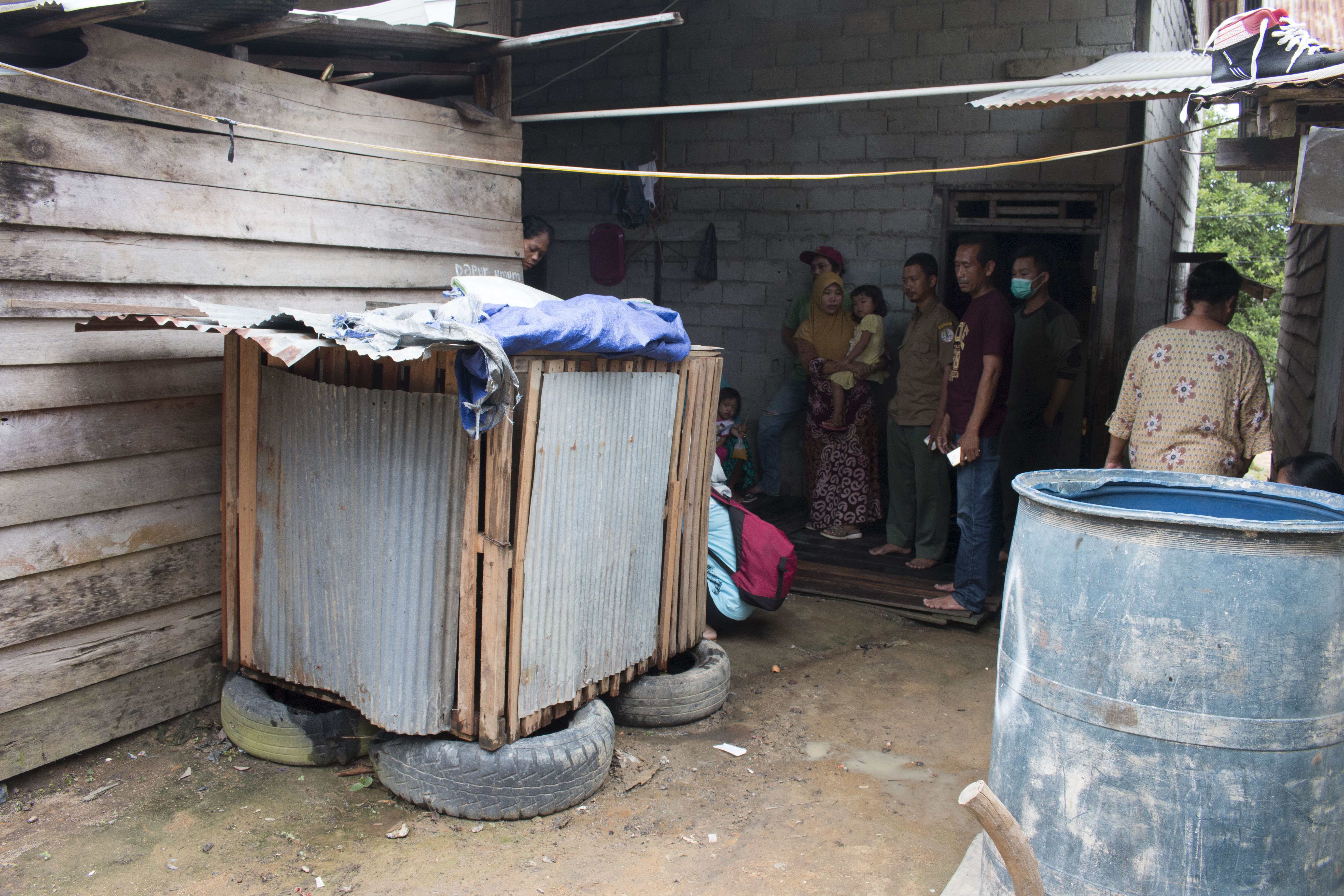 When vet Uwi opened the door, at first Amy wouldn’t look at her and stayed slumped against the wall. She had the dead eyes and blank gaze that come from a lifetime of loneliness and neglect. She seemed to have completely given up on life.

But then Uwi reached out and touched her gently and Amy responded by moving closer and holding out her hand. She looked up pleadingly at her rescuer.

Amy is now safely in our rehabilitation centre and the team is working hard to help her recover. She was deeply traumatised at first. She sat in her hammock in the corner of her quarantine enclosure and stared blankly into space.

Heartbreakingly, the vets’ health check has revealed that Amy can’t straighten her legs and her backbone is bent - no doubt as a result of her time in captivity. They believe she is about seven years old. 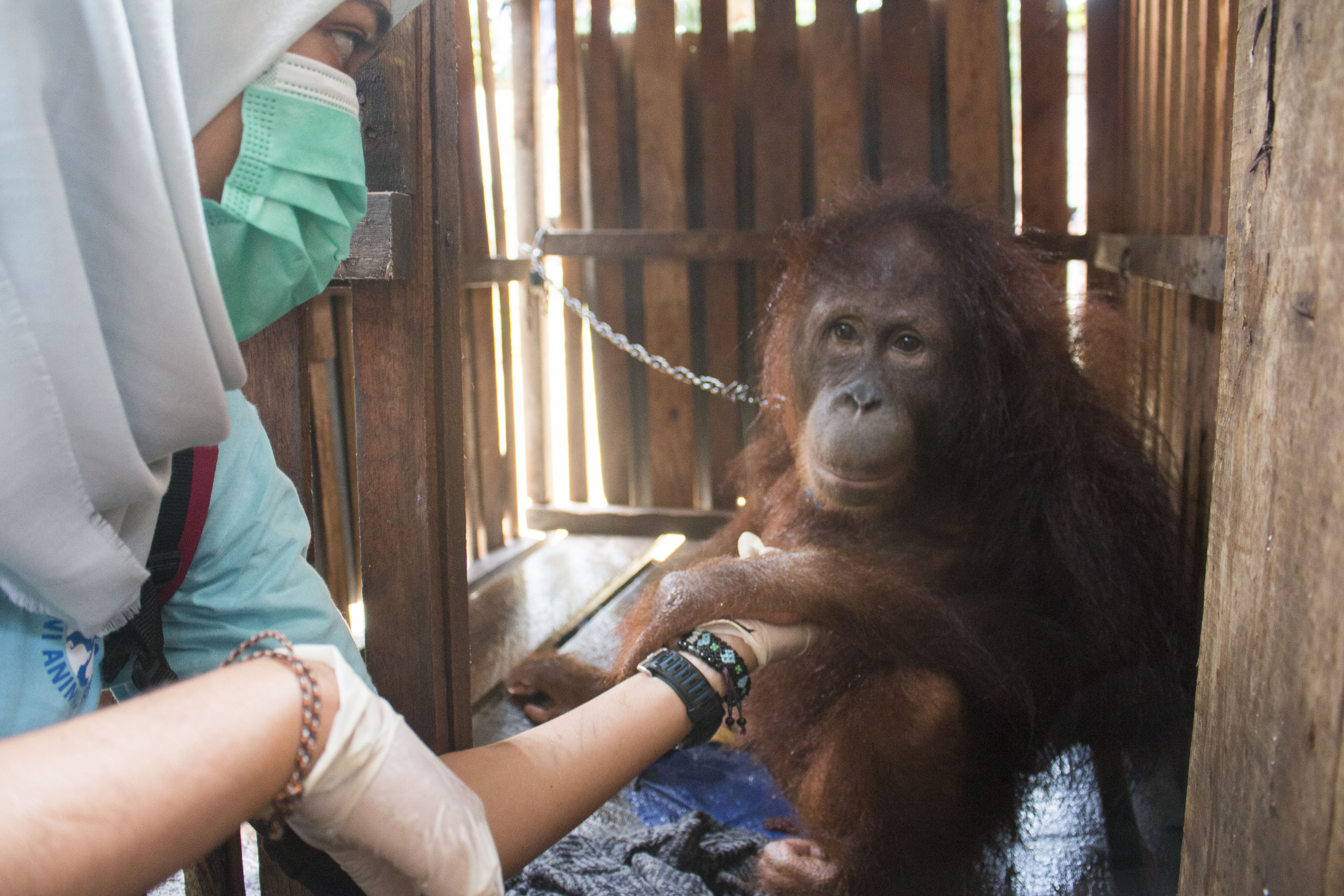 In the wild, infant orangutans stay with their mothers until the age of six to eight, learning from them the skills they will need to survive in the forest. But it is likely that Amy spent those years alone in captivity, without her mother to comfort or protect her. A gun pellet was found lodged in her armpit, suggesting that Amy was wounded when her mother was shot dead trying to protect her infant.

Karmele L Sanchez, Programme Director of IAR Indonesia, said: "This is a serious animal welfare problem. Many orangutans in this area are treated worse than dogs, chained all their lives and living in deplorable conditions. You can see the sadness in Amy’s eyes. If we hadn’t rescued her, she would have suffered all her life, chained up until the day she died.”

Alan Knight, IAR Chief Executive, said: “This is a tragic tale of cruelty and neglect. It will require plenty of time and patience for Amy to recover and it is still doubtful as to whether she will ever recover enough to be a candidate for release back into the wild.”

Sanchez added: "It’s high time people realised that, if they keep breaking the law by capturing orangutans and keeping or selling them as pets, then the species will soon become extinct.

“Anyone who is offered an orangutan as a pet should certainly not buy it. They should immediately contact the authorities and report the person trying to sell it.  And if people are not willing to cooperate by surrendering the orangutan and persist in breaking the law, then the necessary action must be taken to enforce it,” she concluded.

We are appealing for funds to help care and rehabilitate Amy after her terrible start to life - if you can, please consider making a donation.