KUBER THE BEAR HAS BRAIN SCAN AFTER LIFE-THREATENING ILLNESS

Kuber the rescued sloth bear has made a remarkable recovery from a life-threatening illness after months of intensive veterinary treatment. The improvement in his condition was confirmed by MRI and CT scans carried out at the Santosh Diagnostic Centre in Bangalore, about two hours’ drive from the Bannerghatta Bear Rescue Centre (BBRC) where Kuber is housed. The centre kindly charged a special discounted rate for the scans.

The five year old bear was rescued from poachers by our partners Wildlife SOS (WSOS) when he was still a small cub. Since then he has been living with more than 70 other rescued bears at the Bannerghatta Bear Rescue Centre (BBRC.)  He is cared for by vets and keepers from WSOS with financial support from International Animal Rescue and Free the Bears Australia. 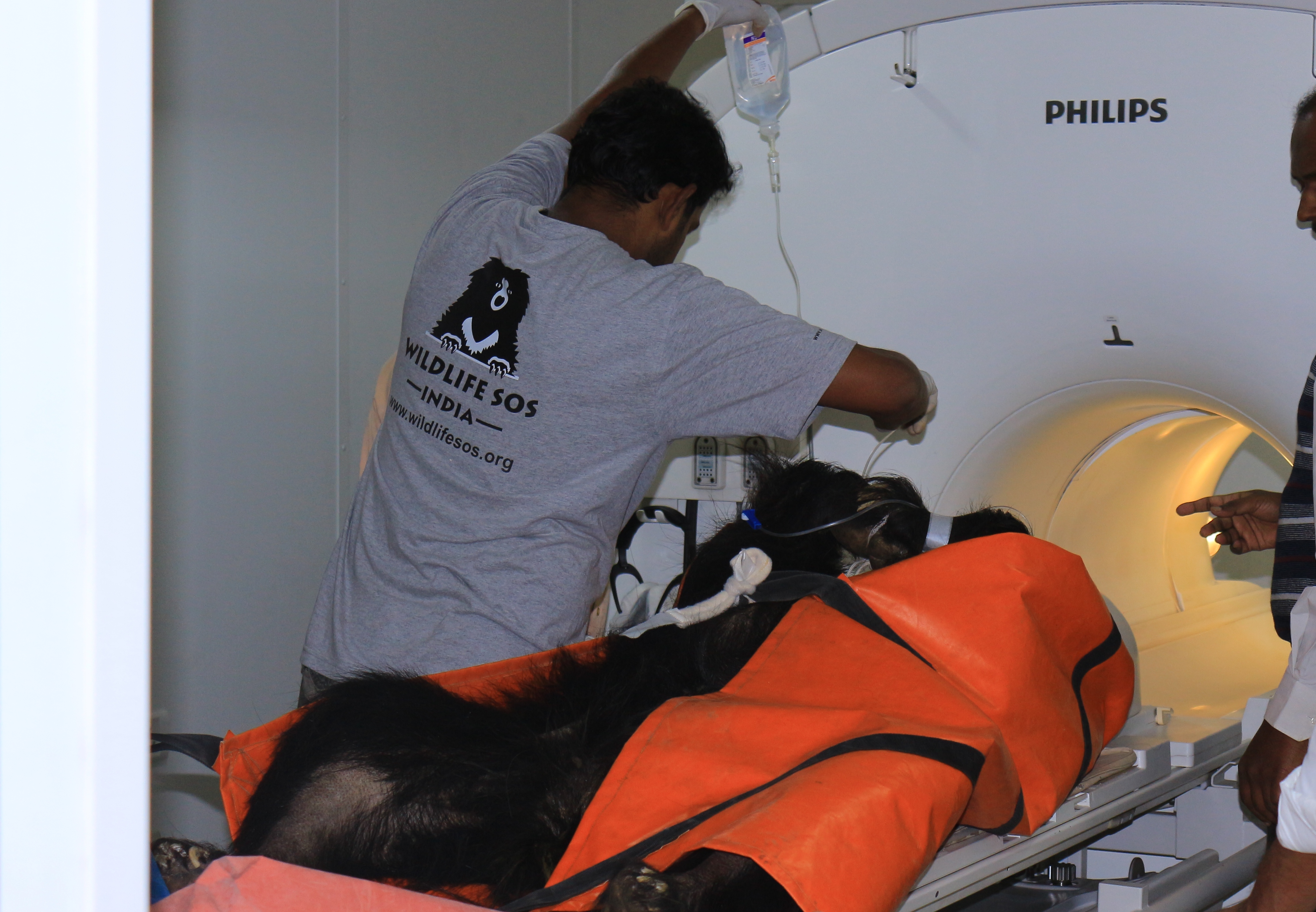 A scan and other tests carried out in March last year confirmed that the young bear had suffered a very rare health condition leading to a haemorrhage in the left cerebral hemisphere of his brain. This resulted in a lack of coordination in the right side of his body. As a consequence Kuber had been kept under close observation and undergone regular veterinary treatment and physiotherapy for his condition.

Much to the delight of everyone involved in his care, the latest MRI and CT scans confirmed that the lesions in the bear’s brain have reduced by about 90% and Kuber is now expected to make a full recovery. 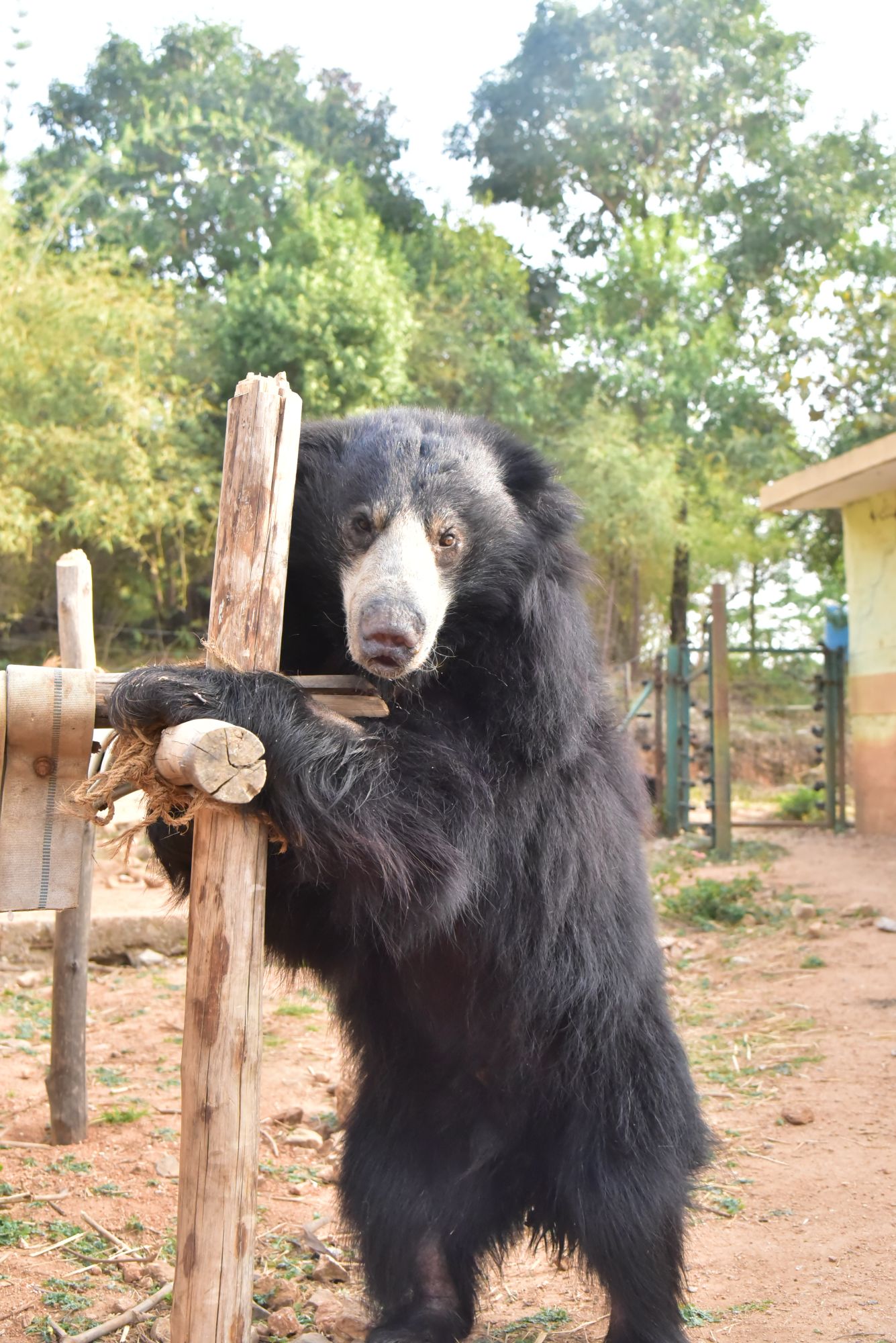 “Kuber’s movement range has improved dramatically, although dragging and knuckling of hind limbs still persists. He is now able to dig and use the structural enrichments all by himself and is accessing the socialisation area. His ability to find buried food and treats reflects his improved sense of smell. The vision in his right eye is almost normal again and he is exhibiting Menace Reflex and Pupillary Light Reflex (reflexes he had lost post-stroke.) Moreover, he is showing some inclination to turn on his right side, something he was unable to do a month ago.”

​Alan Knight, IAR Chief Executive, said: “It’s not every day that a bear has a brain scan! However, we always do everything we can to keep the bears healthy and happy and, in this instance, we were able to confirm the improvement in Kuber’s condition using the latest facilities and equipment. I ‘m delighted to hear that the treatment the vets have been giving Kuber has resulted in such a remarkable recovery.”

Kartick Satyanarayan, Co-founder of Wildlife SOS said: “We are overjoyed that the medical treatment has had such a huge impact on Kuber’s condition. It is always a difficult time for us when any of the animals in our rescue centre is suffering poor health. Thankfully, we have a very capable and dedicated veterinary team committed to the welfare of each and every animal in our rescue facilities. We are hoping that Kuber will eventually make a complete recovery from his illness. ”

Kuber’s condition will continue to be monitored closely by the vets and keepers in the weeks and months ahead.