After two years shut up in a dark wooden box, an orangutan in West Borneo has finally been freed and taken to our rescue centre for treatment and rehabilitation. All he knew of the outside world were the sounds of people passing by and the occasional visit from the man who held him prisoner. When he was found he had nothing but a plastic bottle and a straw to occupy and amuse him.

This is the second time in less than two months that an orangutan has been found living in a small barren crate, hidden away in the darkness.

The four year old male orangutan named Kotap was rescued by our team and officials from the forestry department (BKSDA) of West Kalimantan (Indonesian Borneo.)  Kotap had spent two of his four years shut up in the box of just one metre square. His captor, a man named Baco, claimed to have been given the orangutan by some people he met in the village of Ketapang. Baco had spotted the small baby ape in a cardboard box and agreed to take him home and look after him. However he soon became concerned that Kotap would disturb the neighbours and so built a cage for him at the front of his house. He had fed Kotap on a diet of human food, including bread and rice. Baco claimed that the orangutan’s favourite meal was uncooked instant noodles, washed down with a sachet of sugary drink.

Officials from the BKSDA had visited the man in his home in Rabak village on a previous occasion but been unable to persuade him to surrender Kotap. However, by taking the time to talk to him and explain the desperate plight of orangutans in Borneo, they convinced him that he must act in the best interests of the animal – and in compliance with the law – and hand Kotap over. 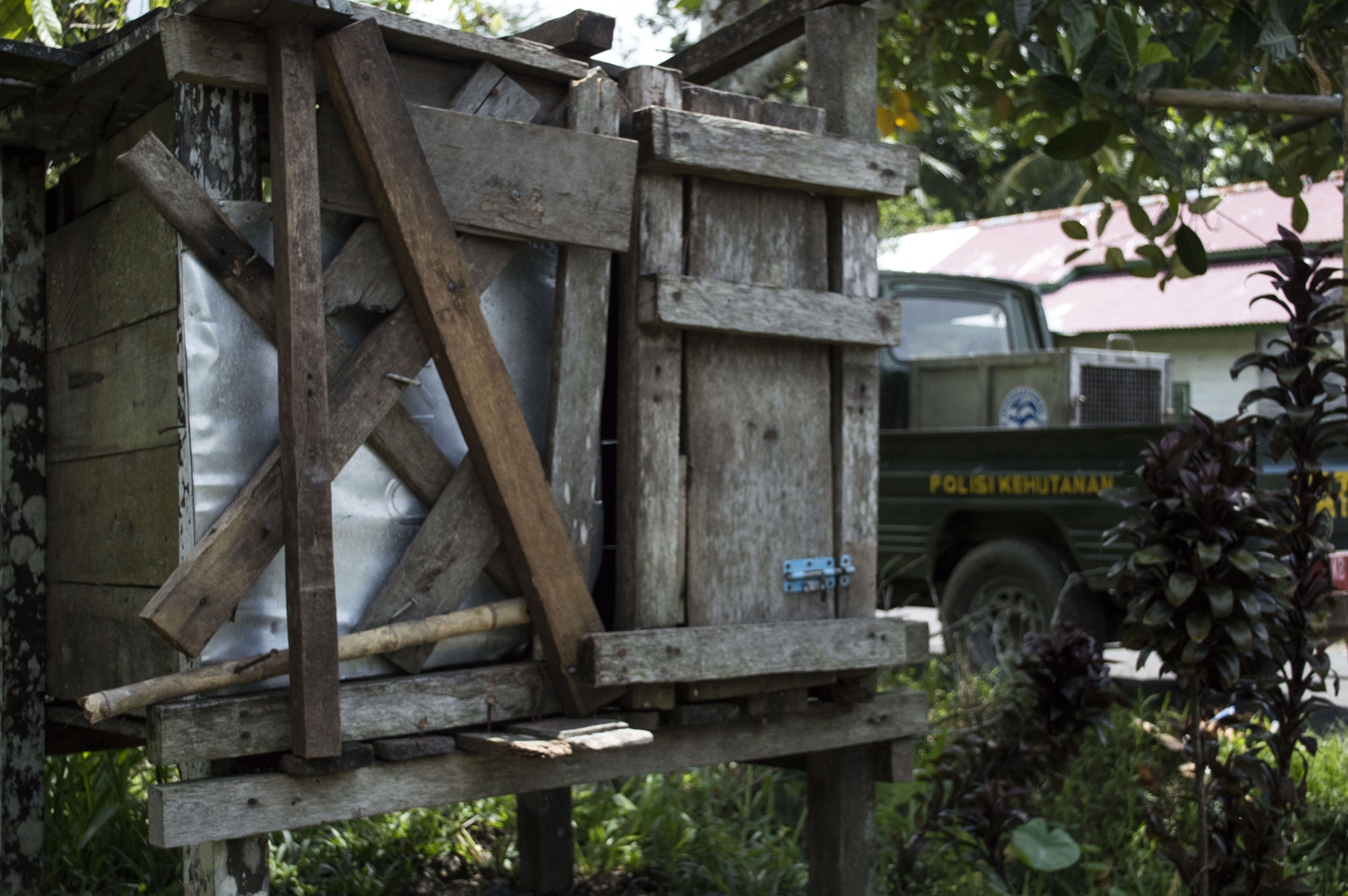 When the door of the box was opened and vet Uwi extended her hand to Kotap, at first he was frightened and ran to the back of the box where he couldn’t be reached. After years in the darkness, he clearly found the sight and sound of the outside world quite terrifying.  Uwi said: “Kotap was very stressed by all the strangers who gathered to see him when he was taken out of the box. He became nervous and aggressive which is not surprising. So during the long journey back to the centre we kept people away from him so that he remained as quiet and calm as possible.”

Alan Knight, Chief Executive, said: “This poor orangutan had been kept alone in the dark for two long years. He was deprived of everything that an orangutan needs to survive in the wild. At four years old, he should still be with his mother, learning from her how to climb and move through the forest, what foods to eat and what to avoid, and how to build a nest in the trees to sleep in each night. 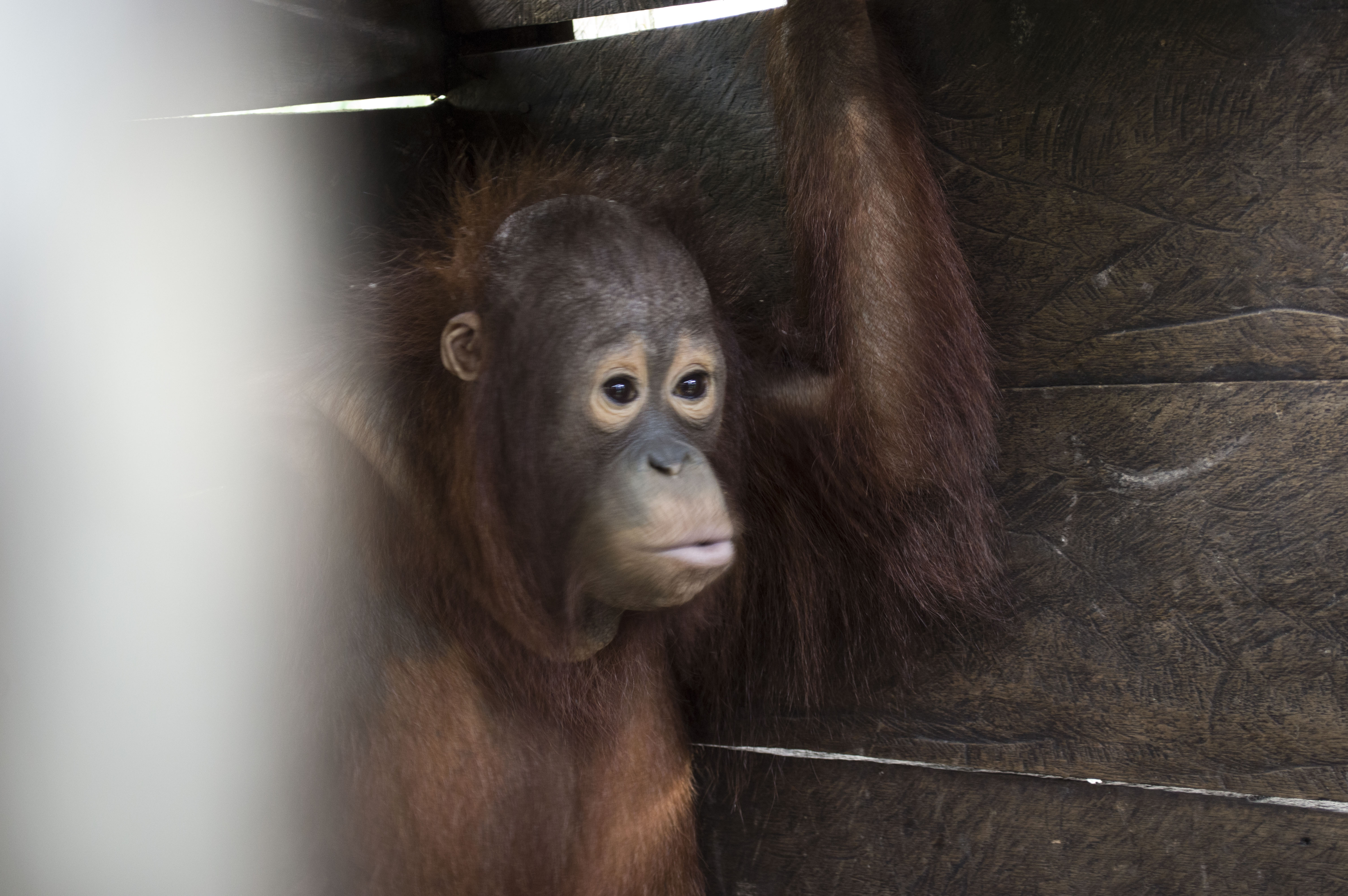 “Instead, Kotap lived a sad and solitary existence, unable to exercise or behave in any way like a wild orangutan. He was fed an unsuitable diet that could have made him seriously ill. Thankfully now he will join other rescued orangutans at our centre and be given a chance of returning to the forest where he belongs. “

Less than two months ago we rescued Amy whose sad story of cruelty and neglect was very similar to Kotap’s.

Karmele Llano Sanchez, Programme Director, said: "It’s high time people realised that, if they keep breaking the law by capturing orangutans and keeping or selling them as pets, then the species will soon become extinct.

“Anyone who is offered an orangutan should certainly not buy it. They should immediately contact the authorities and report the person trying to sell it.  And if people are not willing to cooperate by surrendering the orangutan and persist in breaking the law, then the necessary action must be taken to enforce it.”