Our team in Indonesia has rescued a Sumatran slow loris that was being kept as a pet not far from Jakarta in Java.  The new arrival has had his teeth clipped – a cruel but common practice among traders in the Indonesian animal markets to make the lorises easier to handle and more saleable as pets.

Buying, selling or keeping a slow loris is illegal in Indonesia but the trade continues to flourish, with hundreds of lorises regularly being caught from the wild and sold in the pet markets or at the roadside. This illegal trade is an even bigger threat to the species’ survival than loss of habitat.

Recent footage posted on Facebook from a bird market in South Sumatra shows a woman clipping the teeth of a slow loris, causing the defenceless animal terrible pain and distress.

“Anyone in any doubt about the cruelty involved in the trade in slow lorises should watch this footage,” said Alan Knight OBE, Chief Executive of International Animal Rescue. “I defy anyone to feel anything less than horror at the sight of the helpless little animal being mutilated so casually and callously. Anyone who likes the idea of having a pet slow loris should watch this and see for themselves the agony these poor animals suffer.” 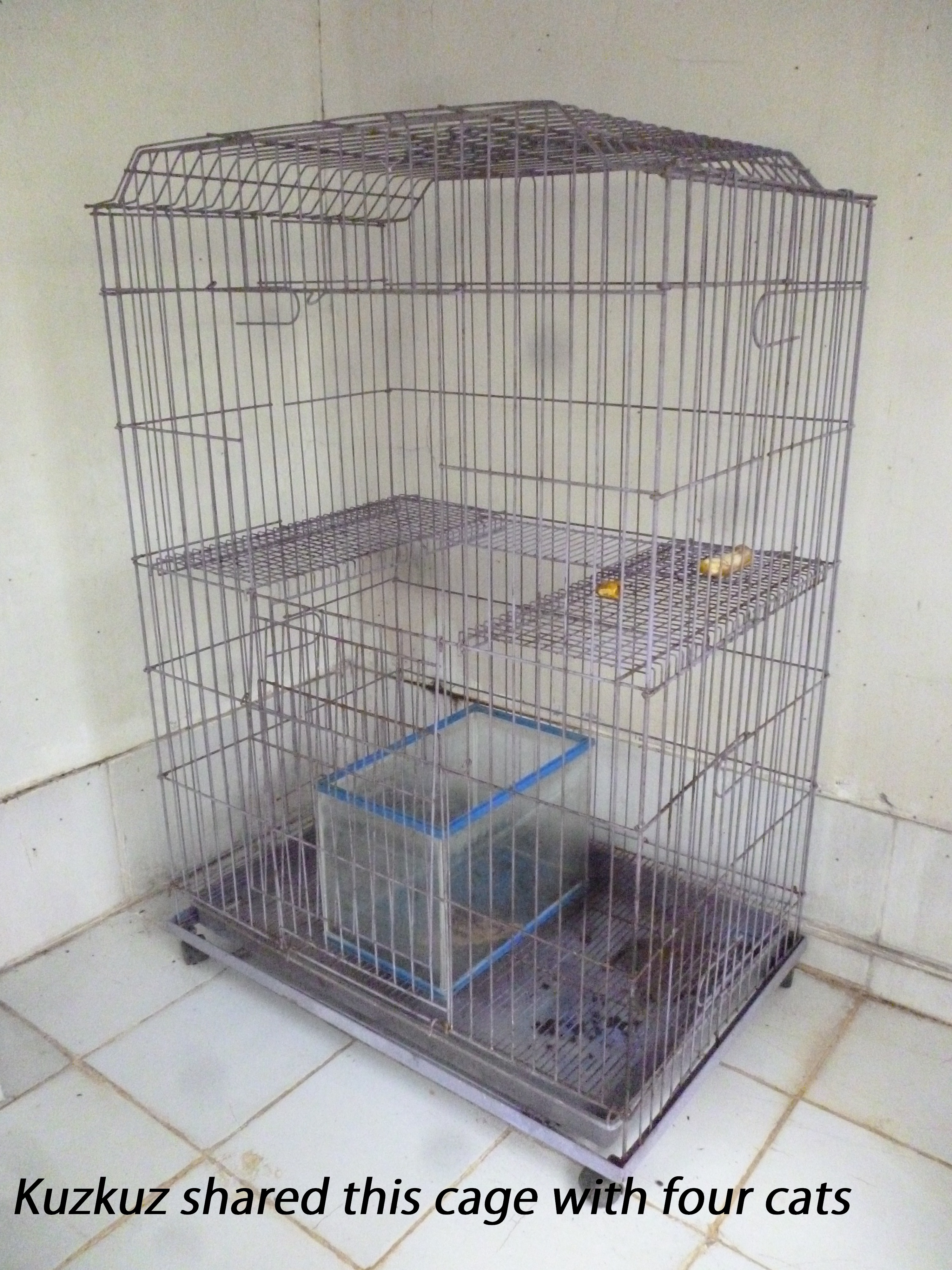 New arrival Kuz-kuz is a Sumatran slow loris who, instead of living freely in his natural habitat in the Sumatran rain forest, was kept in a cramped, dirty cage also used to house cats. Instead of socialising with other slow lorises as he would in the wild, Kuz-kuz had the company of four Persian cats. Instead of sleeping on a branch high up in a tree, Kuz-kuz slept in a kennel. Instead of foraging for his own food (a mixture of wild fruits, nectar from flowers, a variety of unusual insects and delicious gum from trees), Kuz-kuz was fed bananas every day.

Like most captive lorises, Kuz-kuz had been caught from the wild. His owner professed to love animals and nature and didn’t realise that keeping wild animals as pets is cruel and is also endangering slow loris populations in the wild. However one day he noticed that Kuz-kuz was not well. He was losing weight and seemed very sick. Fortunately he called the International Animal Rescue Primate Rehabilitation Centre close by in Ciapus to seek help.

The IAR team arrived quickly to rescue Kuz-kuz, who had a dental infection from the tooth clipping. He also found it difficult to move because he had been confined to a cramped cage for so long and his poor diet had left him very weak and thin. 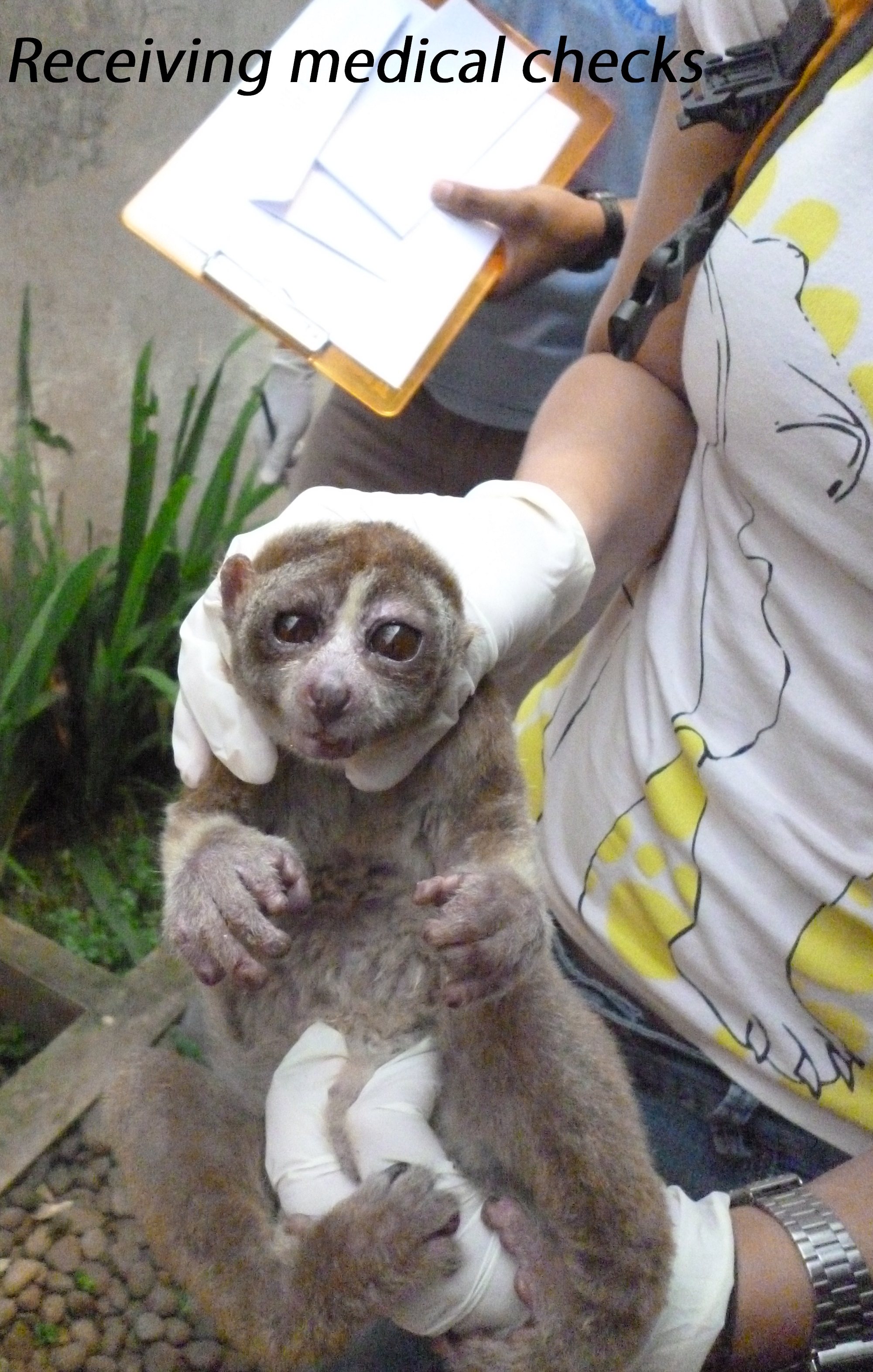 The team took Kuz-kuz to the centre where he received medical treatment and was fed a more balanced diet. Sadly, because his teeth have been removed, he will never be able to return to the wild. However, after he regains his health he will certainly spend a happier life in a large enclosure with the branches of leafy trees to sleep in, natural foods and others of his own kind for company.

Karmele Llano Sanchez, Project Director of IAR in Indonesia, said: “Kuz-kuz’s case is a typical one but at least we were able to reach him before it was too late. Many slow lorises die a painful death from infection after their teeth have been clipped and those like Kuz-kuz that do survive often need complex dental surgery to repair and rebuild them. I can’t believe that anyone would choose to buy a slow loris after hearing how much they are forced to suffer to become someone’s pet.”

IAR’s Primate Rescue and Rehabilitation Centre is currently caring for more than 300 slow lorises that were victims of the illegal pet trade. Last November the team took in a huge haul of more than 200 Sumatran slow lorises confiscated from illegal wildlife traders before they could be sold in the pet markets of Jakarta. A significant number of these, with their teeth still intact, have already been released back into a protected area of the Sumatran rainforest. Many more however had had their teeth cut before they were rescued and may never be able to return to the wild.