In June IAR’s Rescue and Rehabilitation Centre in Ketapang saw the arrival of two new orangutans, Obi and Muria. This brought the number of orangutans rescued by the IAR team since 2009 to a total of 100.

Far from being a cause for celebration, this rising figure illustrates the desperate plight of the orangutan in Borneo and the ongoing threats to its survival. Says Karmele Llano Sanchez, Project Director of IAR Indonesia: "The huge influx of orangutans into rescue centres is a big source of concern for all conservation groups, organisations and individuals. If we don't act and do something now, soon it will be too late."

You can read about Obi and Muria's rescues below: 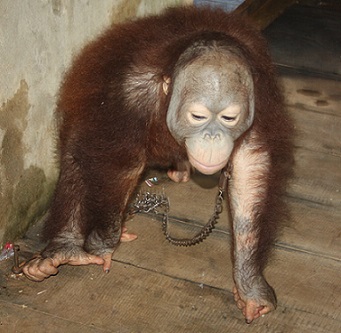 On 3 June the Forestry Department (BKSDA) officials and the IAR rescue team left Ketapang early in the morning for a four hour ride to the location where an orangutan was being kept illegally. When the team arrived at the house in Pulau Kumbang, Teluk Batang they found Obi chained up inside.

Obi is a three year old, bright little male orangutan whose spirit has not been broken by his captivity in a local village. It was claimed by his captors that he had been found by a farmer in Sungai Padu next to a palm oil plantation. Despite knowing that orangutans are a protected species, the family thought it was ‘nice’ to have one and kept him chained by the neck in a toilet for ten months. When confiscating orangutans the rescue team always questions the owners about the animal’s background. Very often they claim to have found the orangutan but in the wild baby orangutans stay with their mothers until the age of seven or eight years. A mother would never abandon a baby, unless she was killed. "Most of the orangutans we rescue come from oil palm areas,” says Karmele. “It's clear that agricultural expansion of oil palm and deforestation is increasing the number of orangutans in need of rescue."

During his time in captivity Obi was not allowed outside and had only a small piece of rope above him to play with. His confinement left him with a pale pigment colour. The family had fed him and bathed him every day but unfortunately his diet had consisted of rice, prawns, left-over scraps, cake, Fanta and, very occasionally, some fruit. After the rangers from BKSDA explained to the owners that keeping an orangutan was illegal and the rescue team explained to the family that Obi would go to a better place, the whole family said a tearful goodbye to him. "Sometimes the owners love their orangutans. They take care of them and they don't want to see them leaving,” says Adi Irawan, Operations Manager at the IAR centre in Ketapang. "They keep the orangutans in very unsuitable conditions but they don’t want to let them go. Very often orangutans die while being kept as pets and, if they survive, when they grow older they become a threat for owners and neighbours," adds Adi. "We can't forget that orangutans are wild animals."

On arrival at the centre, Obi was checked by the veterinary team who found him to be in reasonable health. He had some chain marks around his neck and calloused elbows from living on the toilet floor and he was grossly overweight. Obi is doing well in quarantine, his preliminary checks are complete and, as long as he is given a clean bill of health by the vets, he will be able to join the other orangutans in a month or two’s time. 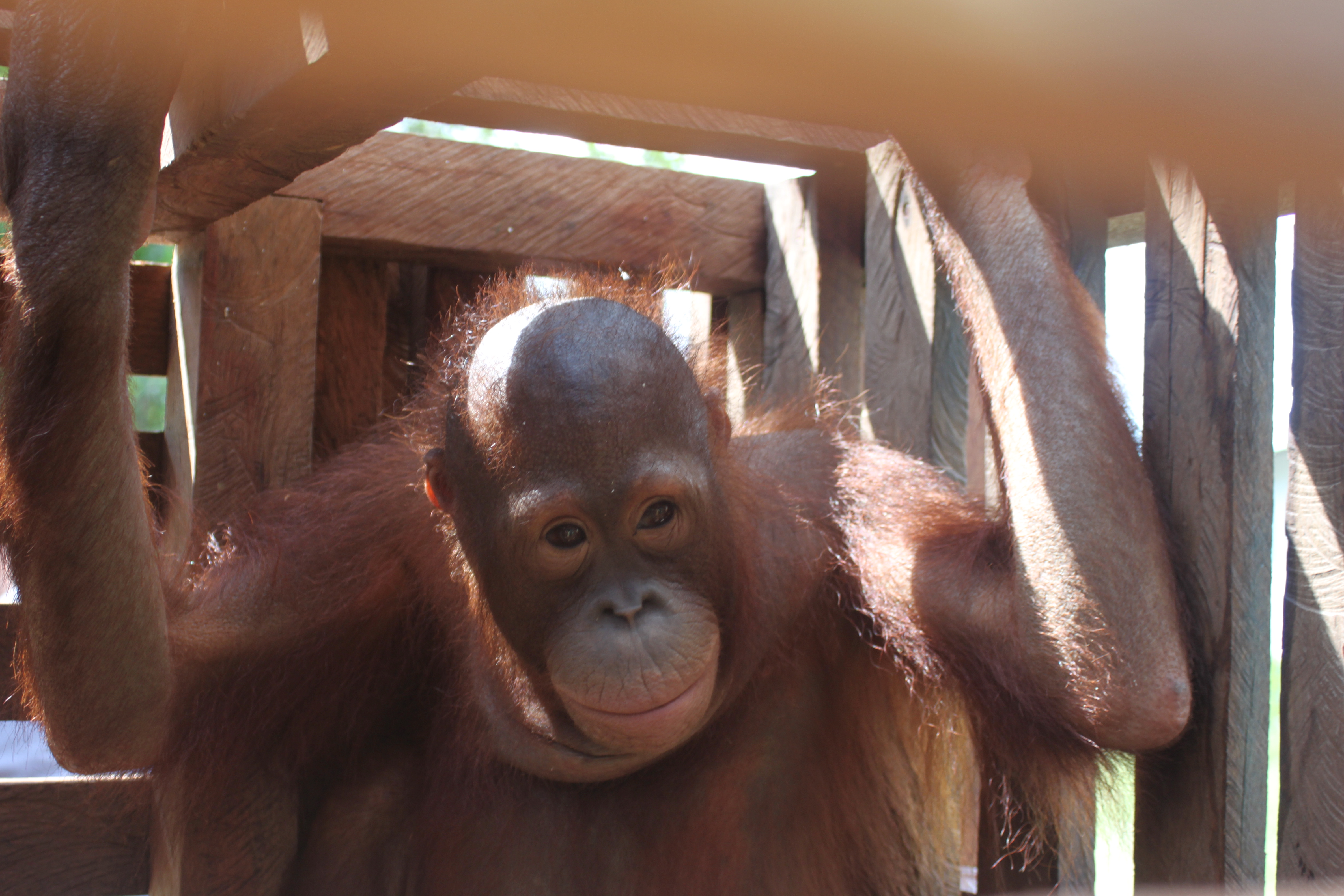 Muria arrived with little notice at the IAR centre in Sungai Awan, Ketapang on 12 June after a ten hour road journey. She is a healthy four year old female who had been kept as a pet for three years by a stallholder. Her owner’s stall was at the edge of the forest and Muria reputedly strayed from the forest one day. The stallholder returned her to the forest but she re-appeared within two hours and he took pity on her and took her home. She was fed on scraps including fish, rice, meat and vegetables. She spent her first year chained by the neck and the rest of her time in captivity in the wooden cage in which she arrived at the centre. The owner would take her with him to bathe in the river.

Luckily a village elder discovered Muria being kept as a pet and informed the owner that keeping an orangutan was illegal. It was he who rescued Muria and made the long ten hour journey to bring her to the centre. On arrival she was calm and inquisitive, settled quickly into quarantine and was soon eating well. Like Obi, she will be introduced to other orangutans once her period in quarantine is at an end and she has been given the all clear by the vets.

On the same day that Obi was rescued the team also visited a house in a nearby village where another family had been reported to be keeping an orangutan illegally. Disappointingly, the orangutan was no longer there. The family claimed that it had escaped, but it's more likely that it had died or been sold. There is no way of tracking this orangutan down. In this case as well, the owner claimed to have found the orangutan in a palm plantation. However, according to another family member, this person had killed the mother before taking the baby orangutan.

"It's always sad to think of the orangutans we have been unable to rescue that may have suffered a worse fate than the lucky ones like Obi and Muria who are now in our care," says Karmele.