IAR’s team has come to the urgent rescue of a wild orangutan and her infant from the forest fires burning in Borneo during the long dry season caused by El Niño.

On Tuesday 22 September IAR’s Operations Manager, Adi Irawan, received a report of an orangutan and infant near a village close to a road. A team from the IAR Human Orangutan Conflict Rescue Unit (HOCRU) immediately prepared to go in search of the orangutan, accompanied by a ranger from the Agency of Conservation of Natural Resources of Ketapang (BKSDA).

The location of the sighting was the Pelansi area in Kuala Satong Village, near PT. Kayung Agro Lestari (from the Austindo Nusantara Jaya Agri Group, a member of the Roundtable on Sustainable Palm Oil.) In this area the forest has been in flames for the past five days. This is the same area where IAR’s team previously rescued another orangutan that was named Pelansi after the location. The orangutan had been found trapped in a snare. At that time the main threat to orangutans was the land clearing activities of the neighbouring oil palm concession. Today the main threat is from fires destroying forest, plantations and threatening people’s lives, homes and livelihoods. The threat is even more serious now because the forest is the only home the orangutans have left and it is vanishing. Fires are also an immediate threat to the orangutans because often they can’t escape and are burnt alive or die from starvation. 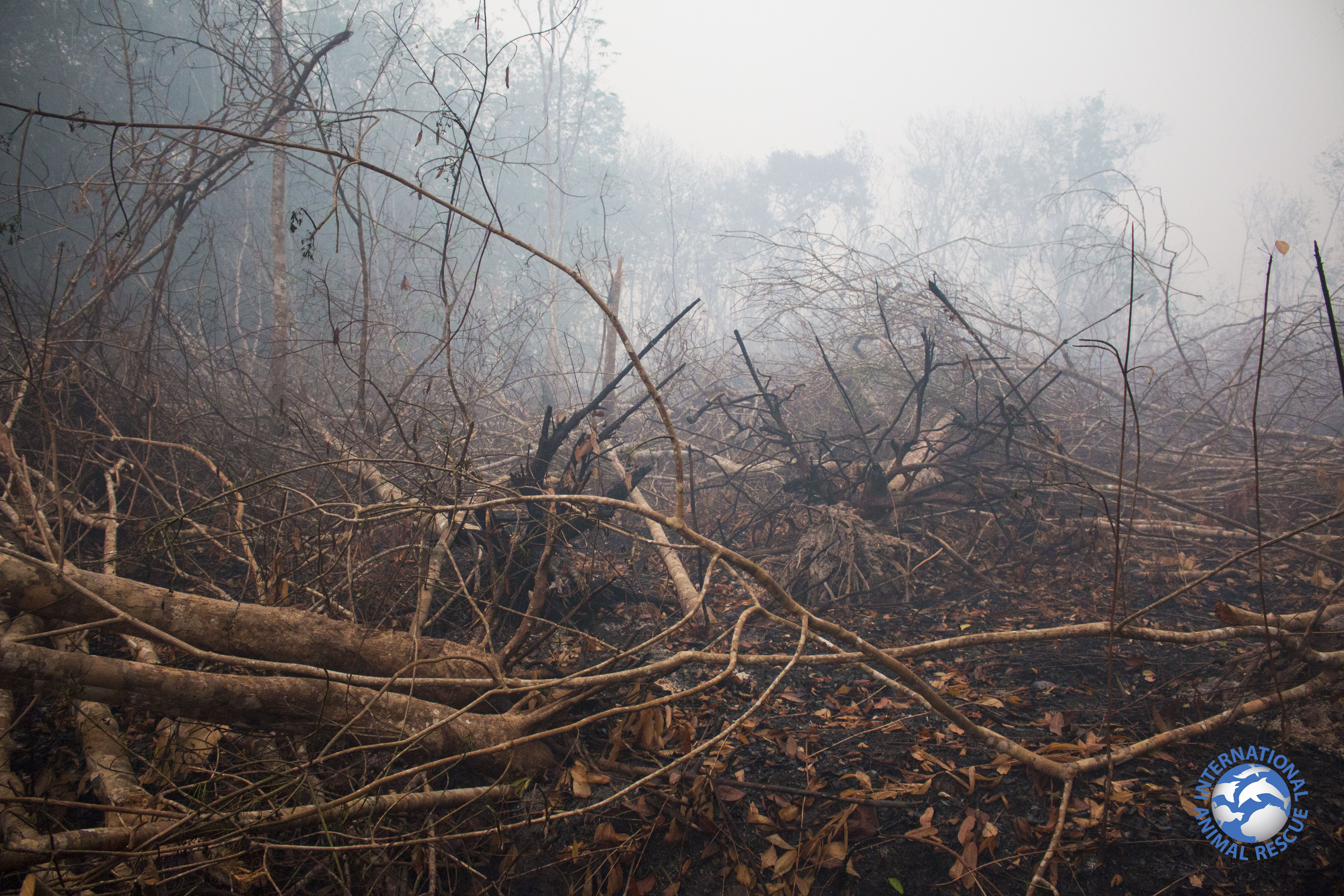 It is not the first time that the IAR Rescue team has had to rescue orangutans from fires. In 2014 the team rescued six wild orangutans from an oil palm concession that had burnt all the forest habitat of a large number of orangutans, killing some and putting others at serious risk. This time the situation was not that different. However, fortunately the report about the orangutans was received in time to save the mother and her infant.

The Human Orangutan Conflict (HOC) team led by Miran left Ketapang very early in the morning and went in search of the two orangutans. With the help of some locals it didn’t take long for the team to find them and follow them until late at night when they were already resting in their nests. In the meantime the Rescue Team comprised of Argitoe, Ogah and vet Ayu got ready to leave at 4am the following morning.

The team arrived at the nest before the orangutans stirred and the rescue operation began. 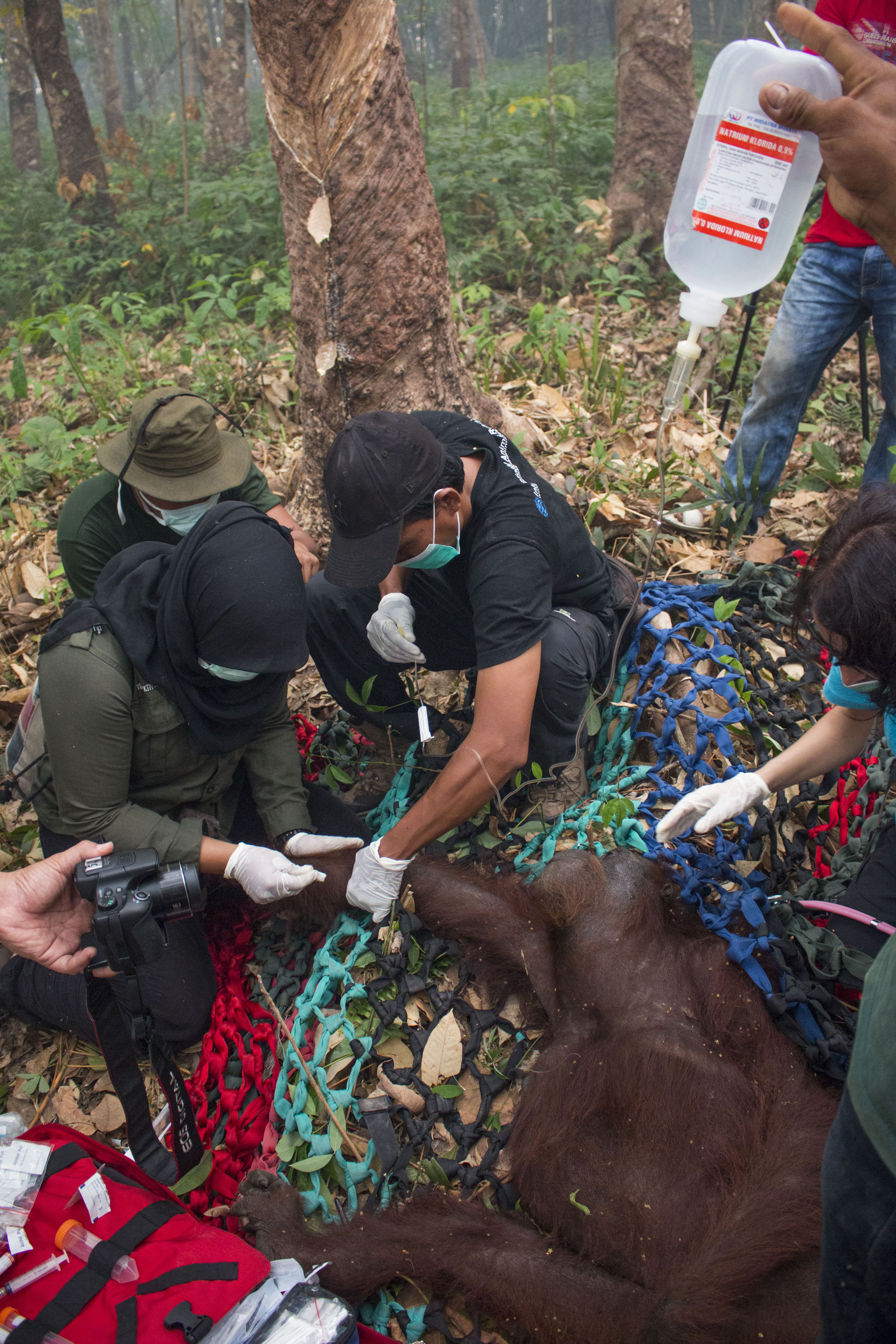 The first dart shot by Argitoe was right on target. The mother orangutan started to weaken but not sufficiently to lose her balance. Meanwhile the team on the ground below positioned a net in order to catch the orangutan when she fell.

The next dart again hit the orangutan who then slowly started falling asleep. She was hanging from a tree but her hand was stuck between the branches and so Ogah who is an impressive and brave tree climber, climbed the tree of about 18m and helped to release the orangutan who fell safely right into the net.

Ayu quickly prepared some intravenous fluids for Mama Kasih (named by the team) as she looked quite dehydrated. "She may have been starving for the last few days, perhaps with nothing to eat or drink since the fires started," said Ayu, IAR Vet Coordinator. "Thankfully we have been able to rescue her in time. If we had taken any longer, her condition would have been more critical."

Soon after the mother had recovered from the anaesthesia, the team set about darting the infant. She was more agile and active and it took a bit longer for to sedate her. But she was also safely darted and mother and infant were both translocated to another area, a High Conservation (HCV) Area within the concession of PT.KAL. The Conservation Task Force team at PT.KAL is committed to monitoring these orangutans after their release. 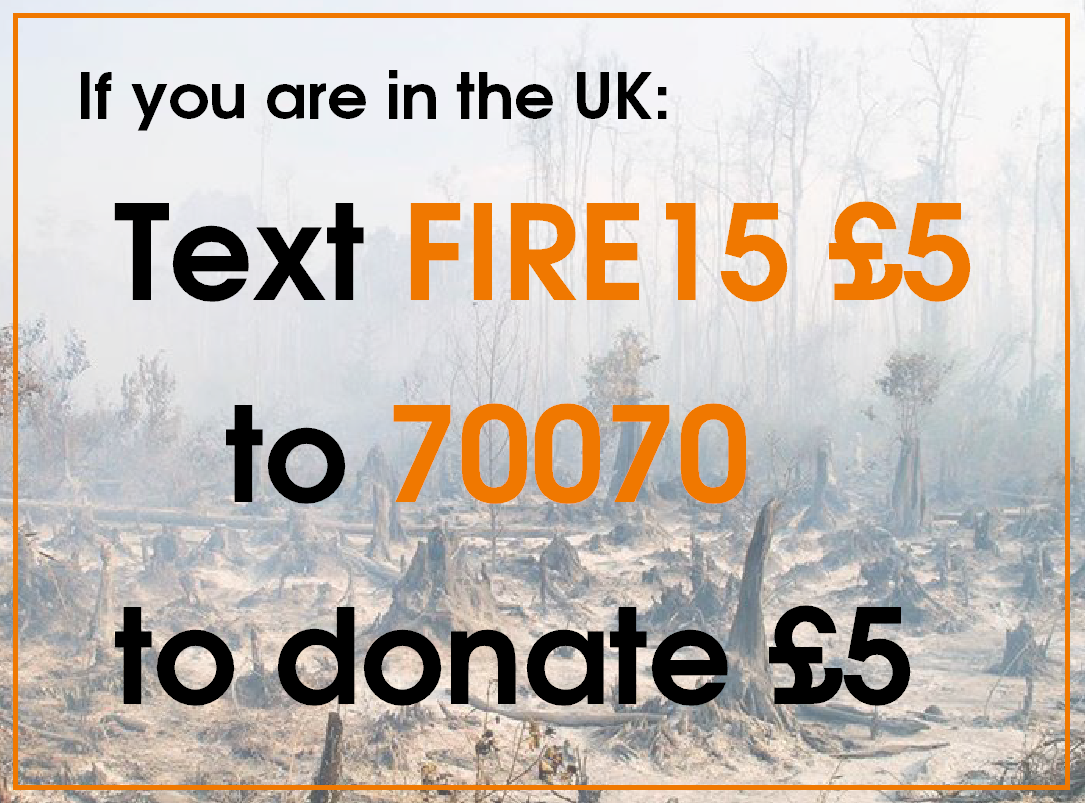 "We hope that these two orangutans will get another chance in this new location," says Karmele Llano Sanchez, Programme Director of IAR Indonesia, "Although unfortunately they will never be totally safe from fires or other threats, it is important that the orangutans can remain in this area where they belong, so we really thank PT.KAL for their commitment to protect this area." 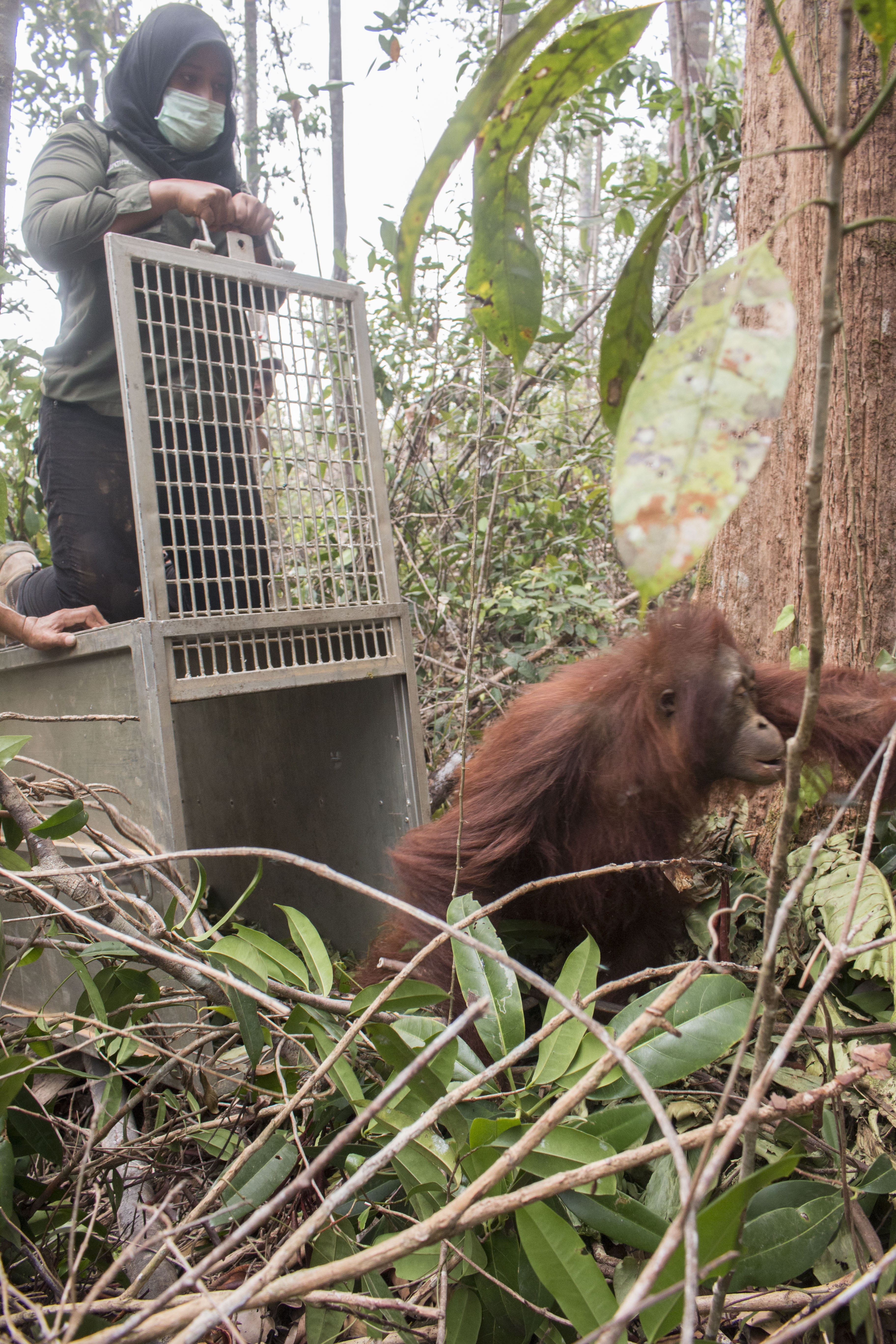 According to the Meteorology, Climatology and Geophysics Agency, in the month of September Ketapang has been the regency with the highest number of fires in the whole province of West Kalimantan, reaching 63. Orangutans and other wildlife and whole habitats are being wiped out or put at risk during these fires. The smoke haze is closing airports in the area and the PSI levels are rising above unhealthy levels which is causing huge problems to human populations as well. But still there is no rain predicted to arrive in one of the longest dry seasons remembered.

"We are worried that if the fires continue there is an imminent risk of more orangutans needing to be rescued or even dying if we can't save them. But also our orangutan centre is at risk from the fires," says Karmele. "We hope that our supporters will stand by us during this serious situation and help us to purchase more equipment to control the fires and protect the centre."

The video below documents the dramatic rescue and release of Mama Kasih and the image immediately above shows the release of her infant back in to safe surroundings.