IAR rescues 3 year old Joko, a male orangutan who was given cigarettes to smoke

On Thursday October 23rd IAR’s orangutan centre in Ketapang received another orangutan, a three year old male named Joko. Bringing the total number of orangutans at the centre to 73

Joko was being kept in the district Manis Mata. The local police responded quickly to the rescue after Joko’s situation was reported in the media and was also receiving attention on social media sites, which showed the condition that he was being kept in. Joko was willingly surrendered, though the owner was upset at having to give him up.

Joko had been kept by Mr Amirudin for about a year. He claimed to have bought him for 1.5 million rupiah (£75) from his relative after feeling a lot of affection for the little orangutan and wanting to take care of him. Mr Amirudin is a farmer who once worked for the conservation of orangutans in central Kalimantan. Joko had been fed on rice and cooked vegetables and was bathed every day. Mr Amirudin would chain Joko to the porch at the front of his house each day and at night he would be brought into the house to sleep in the same bed as him.

Neighbours of Mr Amirudin would regularly give Joko cigarettes to smoke and he was also given rice whiskey to drink. Mr Amirudin reported that Joko had had diarrhoea several times which he had treated with drugs he got from the paramedics who treat animals.

Joko was brought to IAR’s rescue centre, still with his chain around his neck, in a wooden box by Pak Dedi Agus and other police from Manis Mata . He is now in quarantine while he awaits the results of his health test. 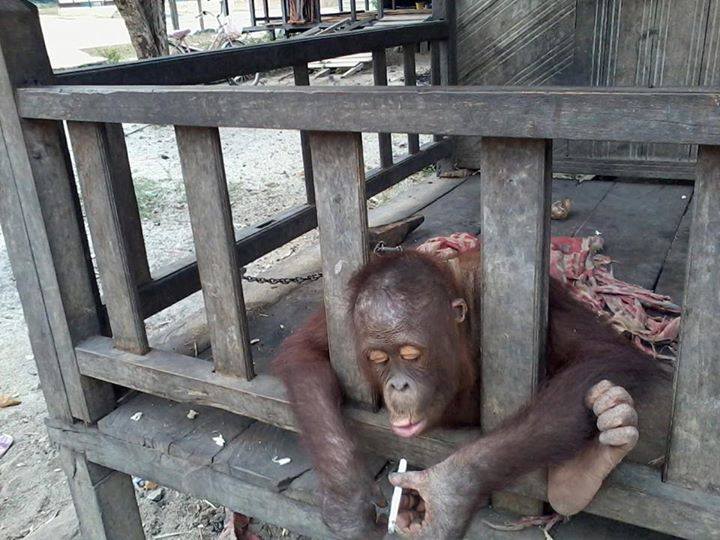 Thank you to Yayasan Palung for the photo.