IAR rescue Bob the orangutan, who was kept in a small iron cage.

On 15th October, the day after rescuing little Jemmi our rescue team set off again. This time to pick up a three year old male orangutan called Bob from the district Tumbang Titi, a five hour drive from Ketapang along very poor roads.

Bob was being kept as a pet along with many other animals including dogs, cats and chickens. Mr Aris, the owner, said that he had bought Bob from the border between West and central Kalimantan, one year ago, paying one million RP (£60). He claimed he bought the orangutan as he felt sorry for him. He kept Bob at the front of his house, in an iron cage, measuring 2m x 0.5m, covered in wood,  Bob was let out of his cage to play with the children in the yard, was bathed twice a week and fed a diet of rice, cooked vegetables, crackers, fruit and drank long life milk and sweet tea with a straw.

At first Mr Aris was very angry and unwilling to give up the young orangutan. The police and forestry dept (BKSDA) took many hours persuading him to surrender Bob. When he finally agreed Bob was put into a cage on the back of the rescue vehicle, but due to the poor road conditions he was moved from the cage and into the car where he was very calm and well behaved during the long journey to Ketapang. 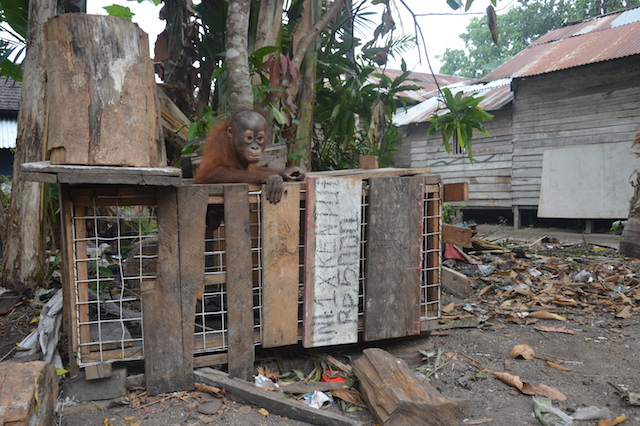 Bob has a very sweet nature and is very used to human contact. His general health is good and he is now going through his period in quarantine while he waits for his health test before being introduced to the other orangutans in baby school.