International Animal Rescue Saving animals from suffering around the world
Home » News » IAR receives Franki, an orangutan that was kept in a...

IAR receives Franki, an orangutan that was kept in a small roadside cage for 11 years

On 17 August, the very same day that Indonesia celebrated 69 years of independence, we received the 69th orangutan into our care at the International Animal Rescue centre in Ketapang, West Kalimantan.

The team at the centre received news of this orangutan from the Centre for Orangutan Protection and reported to the Agency for Natural Resources Conservation (BKSDA) in Pontianak. The orangutan, named Franki, was being kept in a small cage on the roadside in Sungai Ambangah village, Kubu Raya district, near Pontianak (as pictured). She was not fed regularly by her owners and would hold her hands out through the bars asking for food. The local children would often feed her on their way to and from a nearby school. The children at the school felt really appalled by the orangutan’s condition. If she didn't receive food from them, she might not eat for the entire day. Franki also had no protection from sun or rain and only had an old rice sack that she used as a kind of cover to sleep under on cold nights.

The owner didn’t want to give her up, which resulted in the BKSDA having to threaten him with legal action. He claimed that he got Franki from a friend when she was a small baby and he had kept her in a cage for 11 years. BKSDA rescued Franki on 17 August and sent her to the IAR centre in Ketapang by plane.

Although Franki has the app 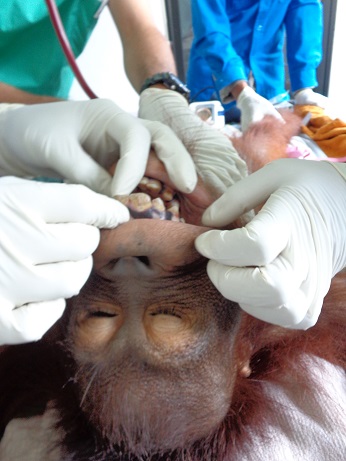 earance of a juvenile female about 6 – 7 years of age, this is as a consequence of the conditions she was being kept in - the small cage and the poor diet would have affected her growth. Her muscles are certainly under-developed owing to the restrictive size of the cage.

Her previous owner also found it amusing that she was frightened of him and he often threatened and disciplined her, which has resulted in her developing a nervous habit of hugging herself for comfort. When she first arrived at our centre she was very nervous of humans so she has been given more time in quarantine than most to adjust to people and help her build her muscle strength by having a very tall cage to climb about in. Her stereotypical behaviour has reduced and she is now much more comfortable in the presence of the quarantine staff and medical team.

Now that her stress levels have dropped the medical team has been able to perform her quarantine testing safely. She is still not able to be handled but, while waiting for the results of her health screening, she has her remaining time in quarantine to gain more confidence. After such a horrible start in life her future certainly looks brighter now with the support and care of International Animal Rescue. 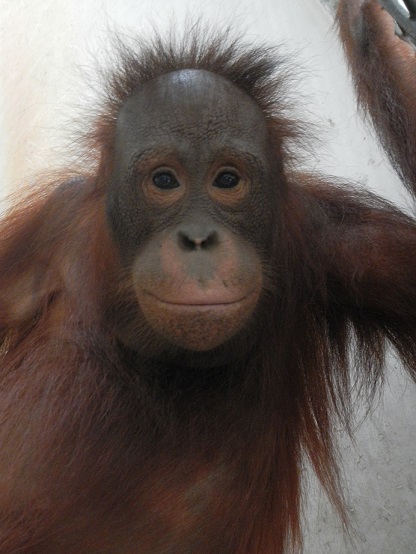 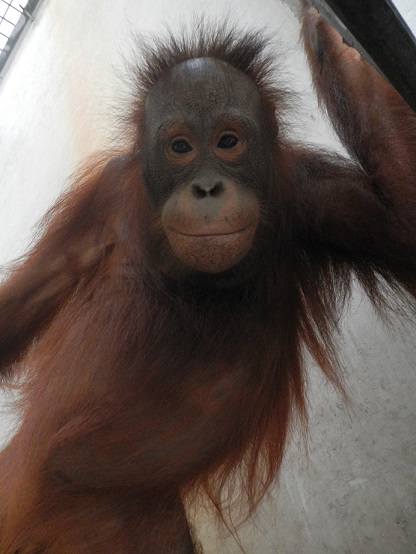 Franki is now safe in the hands of International Animal Rescue.