On the date designated by the United Nations as a day to celebrate wildlife in all its forms, we are pleased to learn of our latest orangutan rescue in Borneo.

The three and a half year old orangutan, named Anjas, was surrendered to officials from the local forestry department (BKSDA) at the orangutan rescue centre run by International Animal Rescue (IAR). The young primate had been kept as a pet for three years in the Kuba Raya area, a regency of Pontianak. His owners claimed to have found Anjas when he was a small baby and said they couldn’t find his mother. This is a common claim by owners of pet orangutans but very unlikely, as a mother would never leave a small baby of her own volition, nor would a small baby orangutan be able to survive without its mother. 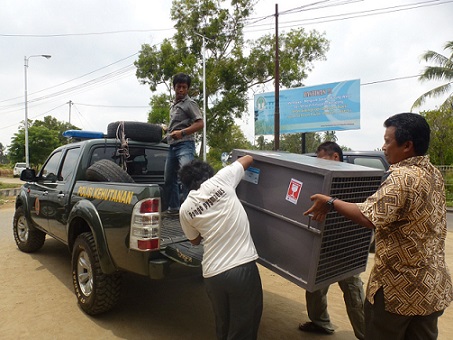 Anjas and his owners travelled by plane from Pontianak to Ketapang, and it was this that alerted the media to the story. It would appear that the owners had good connections at the airline because, in spite of making a number of requests, IAR’s team has always been refused permission to take orangutans onto a passenger flight. The lady owner was extremely upset at having to surrender Anjas. When he was put into his quarantine cage at the rescue centre (after having his clothes removed) and given armfuls of leaves to nibble and nest in, she told him not to touch the leaves because they were dirty! 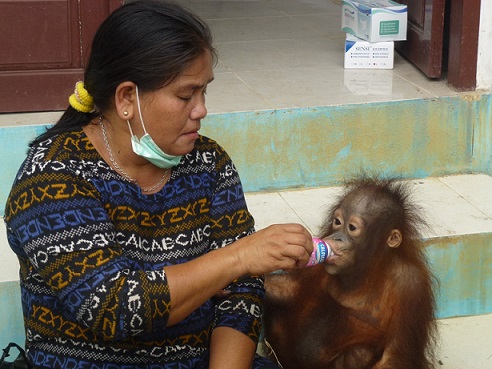 His owners treated Anjas like a human child, giving him daily baths with soap, dressing him in clothes and even washing his rear after he defecated. He had a cage made of cement and wood, which he slept in at night and he would also be put in there if he was “naughty”. His diet consisted of rice and vegetables, sweet tea and milk, which caused him to have a rectal prolapse, but now he is receiving the correct nutrition, this problem has corrected itself.  He also has signs of an old unknown injury to his foot, leaving him unable to use one of his toes. It appears that something had been wrapped around a couple of his toes for a period of time.

Karmele Llano Sanchez, Executive Director of IAR Indonesia, said: “Anjas has had his first quarantine check and, considering he has spent three years being treated like a human baby, he is adjusting surprisingly well. Once he is out of quarantine he will be able to join the other rescued orangutans in our forest school, climb trees and get as dirty as he likes!”

Alan Knight, Chief Executive of International Animal Rescue, added: “Anjas’ story highlights the unnatural and unhealthy life captive orangutans lead as pets. They are often treated like substitute children, dressed in clothes and expected to behave like people rather than wild animals. Anjas’ situation would only have got worse as he grew bigger and stronger. In most cases, once an orangutan is no longer small, sweet and compliant, its owners confine it to a cage and even chain it up to keep it under control. I’m delighted that, thanks to the BKSDA and our team in Borneo, Anjas has been spared that fate.

“World Wildlife Day” is a day to celebrate the rich and varied wildlife that shares our planet and raise greater awareness of the many threats to its survival. In this respect Anjas’ rescue is a timely one, illustrating the plight of so many orangutans in Borneo and demonstrating the work International Animal Rescue is doing to help them.”

The story of the unusual rescue has been covered by an Indonesian news channel, see below for the clips of these: