IAR’s team in Ketapang, West Kalimantan, rescues two starving orangutans from palm oil plantations and finds remains of another that has been burnt alive.

In the nick of time IAR’s team in Ketapang has come to the aid of two orangutans stranded among the ashes of the forest after it was burned and cleared to make way for palm oil plantations.

On 7 November, the forestry department (BKSDA) and IAR received a telephone call from a member of local group Yayasan Palung informing them of the existence of an orangutan in Limpah Sejahtera palm plantation. The orangutan had fled from a neighbouring plantation PT. Arthu where last month huge fires devastated the area of forest prior to starting land clearing. The resident orangutans and other wildlife in this forest have either been burnt alive or been left without food and faced death by starvation.

The emaciated orangutan found by the workers of the plantation had clearly been without food for a long time and looked malnourished, dehydrated and weak. The workers managed to capture her without any trouble. They tied her up and immediately called the IAR and BKSDA rescue team for help. The team rushed to the area and found an orangutan still tied up. The medical team sedated her and gave her fluids. The orangutan was a female of about 10 years old, extremely underweight and very small. She could only get food from the palm trees as the forest where she lived had been reduced to ashes.

The orangutan is now at the IAR Rehabilitation Centre in Sei Awan and will be released into a safe area of forest when she has recovered and been restored to health.

The following day, 8 November, another call was received about a second orangutan in the same plantation, this time an adult male. The orangutan looked very weak and thin and, after following him for some hours, the team decided to let him go as the stress of the long pursuit could cause him serious damage.

Two days later, on 10 November, the team set off to try to rescue this orangutan once more.  They feared that that if he wasn’t rescued as soon as possible, he would die of starvation.

After a few hours walking in the burnt peat swamp field under heavy rain, the team, with help from one of the excavators land-clearing the area, managed to dart the big male who was so malnourished and weak that he was barely able to stay upright. He was also transported safely to the IAR orangutan centre. 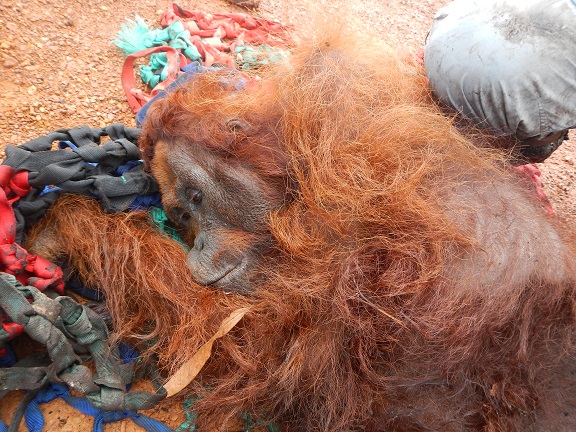 These rescues were made possible with the help of a team of workers from both plantations PT. Arthu and PT. Limpah Sejahtera bordering Arthu plantation. Without them the rescues would not have been successful.

At least three more orangutans will need to be rescued from this plantation.

Karmele Llano Sanchez, Project Director of IAR Indonesia, said: "The landscape of this plantation is very bleak and depressing - the same depressing scene that the orangutans are left with after their forest has been destroyed. It’s horrific to think how much they are suffering from the consequences of the expansion of oil palm agriculture. Orangutans and other wildlife are being burnt alive to make way for the plantations. We urge oil palm companies to practise their business in a more responsible way, otherwise very soon orangutans will be extinct from many areas.”

Veterinarian Christine Nelson was part of the rescue team. She said: "We saw the carcass of an orangutan that had been burnt alive in the remaining ashes of the forest. It's one of the hardest things I've ever experienced in my life as a veterinarian. I'm still in shock, but I'm happy that we have at least managed to save this one poor male from starvation or from being burnt alive."

Local man Argitoe Ranting leads the IAR rescue team. "It's a desperate and never-ending situation,” he said. “Our forest in Kalimantan is being wiped out and the orangutans are the innocent victims. It is absolutely heartbreaking.”