On 15 September our team in Indonesia held the first ever workshop in West Kalimantan to discuss the issue of human-orangutan conflict (HOC). The purpose of the workshop was to increase the capacity of local government departments to mitigate human-orangutan conflict, focusing particularly on training in the assessment of HOC situations. The results of the project were to be disseminated as widely as possible.

Agreement was reached on a number of important issues. Below is a summary of the main outcomes:

-    The agro-industries agreed to incorporate a more “orangutan conservation-friendly” management strategy into their future plans. One agreed action was to establish an HOC team comprised of community members to handle human-orangutan conflict in their concessions.

-    The local agricultural communities requested that the Indonesian government take more responsibility for legally processing people who break the law by killing orangutans (for whatever reason), keeping orangutans as pets and/or being involved in the illegal trade in orangutans.

-    It was agreed by all present that there should be a joint effort to reach local communities, particularly remote communities, to educate them about orangutans and their conservation status (ie, the law to protect them.)

-    The local government groups agreed that they would establish a small Multi-stakeholder Task Force to discuss the formation of a Standard Operating Procedure (SOP) for the unified handling of human-orangutan conflict, specifically for the Ketapang and Kayung Utara areas.

-    It was agreed that acceptance of the “HOC handling SOP” at the local level in Ketapang and Kayung Utara would be encouraged.

-    It was also collectively agreed that more effective zoning and land-use planning is the cornerstone of successful strategies to reduce (orangutan) habitat damage from oil palm cultivation. Therefore, the Task Force will undertake initial mapping of existing plantations showing all High Conservation Value areas as overlays, as well as concessions that have already been granted but not yet been developed in Ketapang and Kayung Utara.

-    The Task Force will also overlay all HOC data provided by the Forestry Department (BKSDA) and IAR Indonesia identifying the most important areas to protect, either because of their importance as biodiversity preserves or as corridors for the movement of orangutans and other key species.

Gail Campbell-Smith from IAR Indonesia said: “This pioneering workshop in West Kalimantan is a vital step towards addressing and resolving the issues of human-orangutan conflict in Ketapang and Kayung Utara. Now that the discussions have taken place, we need to see the ideas developed and the agreed actions implemented.

“There is definitely a general will to tackle the problem which is extremely encouraging and indeed will be crucial if we are to establish an HOC mitigation programme that is effective in saving the lives and protecting the habitat of orangutans in West Kalimantan.” 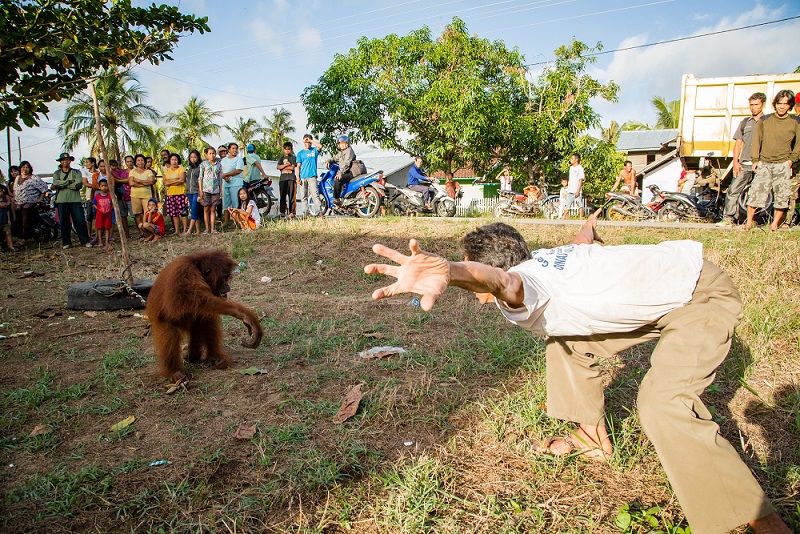 The HOC workshop was to address and find solutions to HOC. The aim is to make HOC cases like Ael's (pictured) a thing of the past.