International Animal Rescue Saving animals from suffering around the world
Home » News » Empowering women and children through our dancing bear...

Empowering women and children through our dancing bear rescue project

By Suvidha Bhatnagar of Wildlife SOS

We recently described how our dancing bear rescue project has transformed the life of one young girl in particular. The project is changing the lives of entire communities - men, women and children – as well ending the suffering of hundreds of sloth bears.

The Kalandars, originally Muslim gypsies with a highly nomadic lifestyle, were famous for their mastery over animals. For three hundred years they earned a living from various types of performing animals, particularly dancing bears. With support from IAR, our Indian partners Wildlife SOS worked towards saving these wild animals from exploitation. While rescuing the sloth bears from their misery and barbaric lives, the charities also opted for a holistic approach involving the rehabilitation of the Kalandar community. This was the only way to ensure sustainable conservation.

The Kalandar rehabilitation programme involves a multi-dimensional process of training people for alternative employments, providing seed funds so that they can use the training to earn a living and end their dependency on performing animals and poaching. Other than offering alternative livelihoods, Wildlife SOS also works towards empowering women, both teaching them various trades and helping with micro-funding so that they can become second income earners, as well as educating Kalandar children to ensure a better future for them.

Under Ms Rakhee's supervision, our Kalandar Community Rehabilitation Coordinator, Wildlife SOS is successfully running education and livelihood centres for Kalandars all over India. In a village called Tonk, Rajasthan Wildlife SOS successfully set up a training school for Aratari - gold and silver threads and sequins embroidered on saris, usually for Indian weddings. Established in 2005, in three years it trained 68 young boys who were all successfully employed by nearby karkhanas (workshops). Twelve boys set up a cooperative under Noor Mohammed Kalandar which now provides them with a good living. It was then decided to give young girls that same training and now a cooperative of about twenty young women also earn a living by making bags and cushion covers. Their skills are often utilised by the shopkeepers of Jaipur for other stitching and embroidery works. 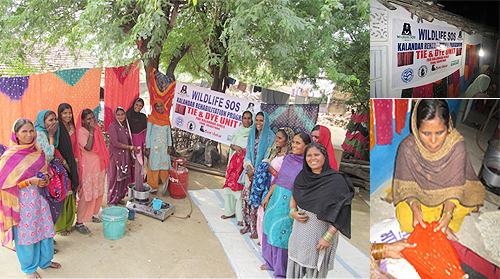 In addition to this, since it is imperative that they learn new marketable skills, another enterprise to empower women has been the creation of a "Tie and Dye" crafts unit that specialises in making colourful dupattas (scarves). This local art is called "bandini" in the local language and the new unit has just started producing these and is managed by a teacher who comes regularly and trains the women of the village. There are currently ten women working in the centre. A woman named Nanhi who has worked at the embroidery unit and who now trains at the Tie and Dye centre said: "I am very happy and thankful to Wildlife SOS for all the support they have provided for the women in Tonk. Now I am an independent woman and can support my family in lean times."

As well as the alternative livelihoods programme, 250 children are being educated in Tonk alone and the children go to various local schools, according to the choice of the parents.  The project provides the books, uniforms and fees as well as tutoring in the afternoons so that these first generation learners can do their homework and study more efficiently. There is a study centre for children that was started in October 2012 and is successfully preparing a junior batch for their board exams. There are currently 21 students in the junior batch and 11 in the senior batch of graduating students. Mohsina, one of our supported Kalandar children who is currently pursuing her Bachelors in Arts (First year), has been a really bright student and scored with merit in the school graduation exam. We are happy to see her going to college and pursuing her dreams of a college degree. 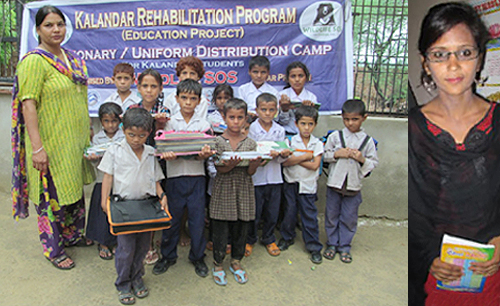 Wildlife SOS also runs a sewing centre for the Kalandar girls and currently 15 girls attend the classes. The girls are trained by Mr Mohammad Hasim Khan. The sewing unit was set up in 2007 and to date 180 girls have been trained at the facility. It allows them to clothe their children and families more economically and saves them from exploitation in the future because they are able to take in tailoring work and earn a little money for themselves, rather than being completely dependent on their husbands or family.