International Animal Rescue Saving animals from suffering around the world
Home » News » Baby howler monkey is rescued after her mother is...

Baby howler monkey is rescued after her mother is electrocuted

A baby howler monkey orphaned when her mother was electrocuted is in the care of Nosara’s Refuge for Wildlife in Costa Rica and gradually recovering from her traumatic experience.

IAR has recently joined forces with Refuge for Wildlife to help raise awareness and funds for their vital work rescuing, rehabilitating and releasing howler monkeys in Costa Rica.

The two to three week old baby was the sole survivor when three monkeys were killed on an uninsulated electrical transformer in Playa Guiones, Costa Rica.

A team from the Refuge had been called out early one morning after a local resident spotted what she thought was a dead monkey on a transformer. In fact, the monkey was still alive although fatally injured. A second monkey was lying dead on the ground below. 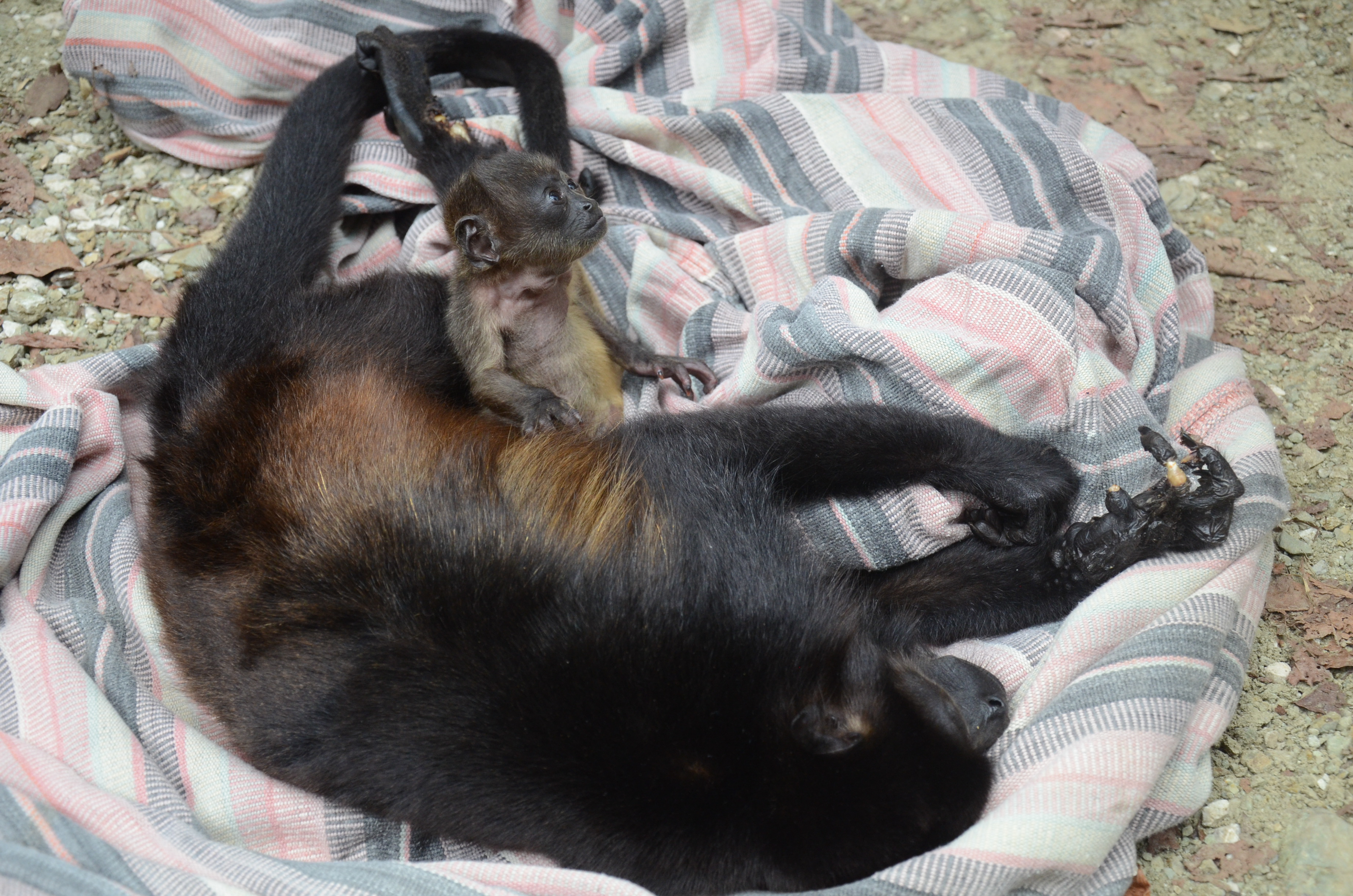 While the rescue team tended to the injured monkey, a female monkey with her baby clinging to her had rushed across the wires to help her relative and had also been electrocuted.  The baby slipped off her mother’s back, was caught by the rescue team and thankfully wasn’t badly hurt. Using special tools - a fibre-glass pole with a hook attached, rubber boots and gloves - the team managed to get the mother down and immediately reunited the pair.

Tragically, the mother died from her injuries shortly after she was reunited with her baby. The orphaned infant, whom the rescuers named Ashley, was taken to the Refuge for treatment and care.

Fortunately the little monkey had only suffered minor burns but was naturally traumatised by the terrible experience. Her carers at the Refuge say she loves to snuggle up with a teddy bear and a hot water bottle which provide the softness and warmth she is missing from her mother.  Following a period of quarantine and clinic supervision, she has now been introduced to other babies of roughly the same age and is starting to play and explore with them which is a very encouraging sign. 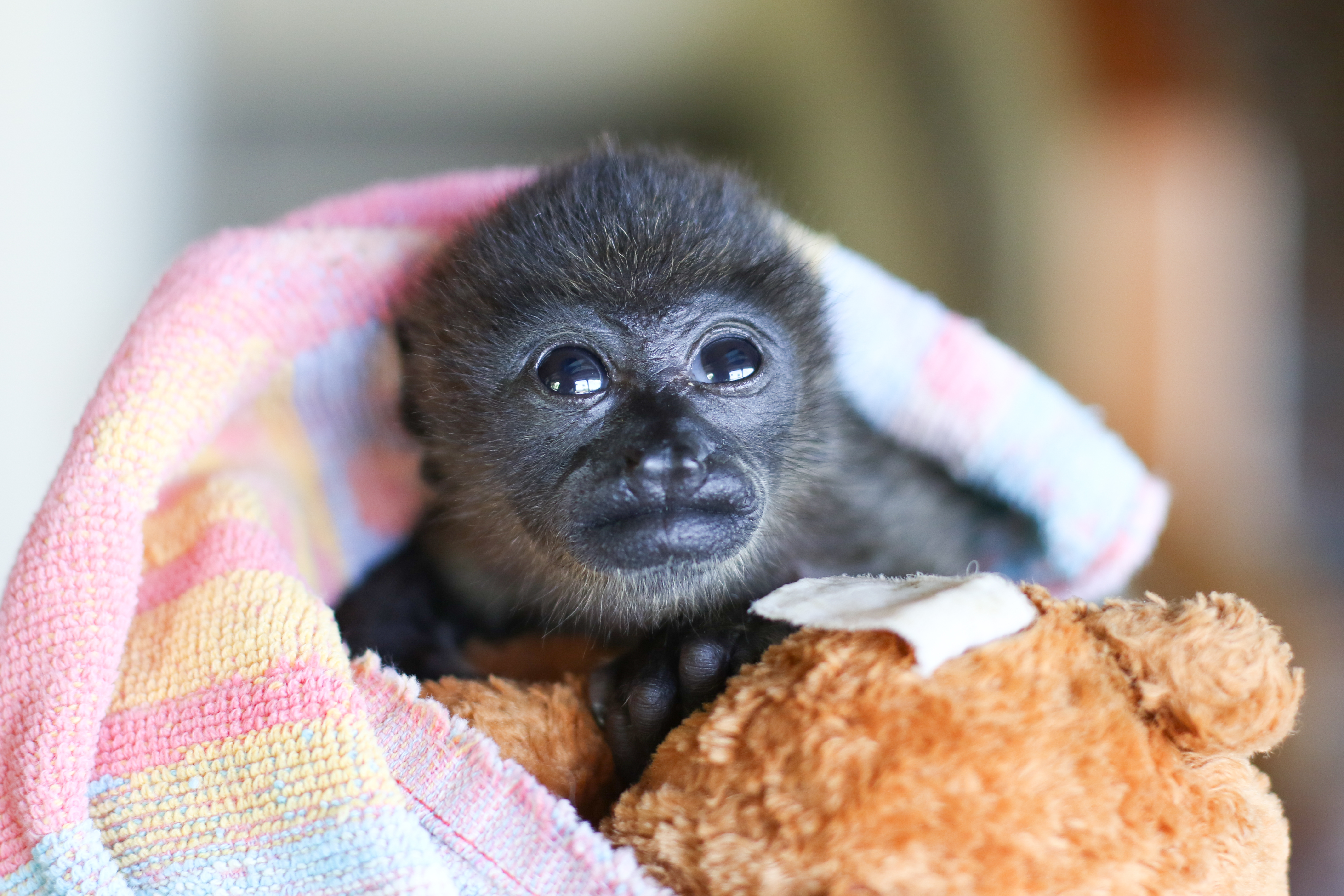 Alan Knight OBE, Chief Executive of International Animal Rescue, said: “Poor little Ashley has had a terrible start to her young life. Losing her mother in such a horrible way when she was just a few weeks old must have been deeply traumatising. It is all credit to the team at Refuge for Wildlife that she is doing so well and is even starting to play and interact with some of the other orphans.

“Uninsulated electrical wires and transformers can prove deadly to monkeys who sadly don’t know the difference between the wires and natural vines and will often travel across wires to get to feeding grounds. This is a particularly serious issue in areas of deforestation where monkeys have no choice but to use the wires once the trees are gone.”

Orphaned howler monkeys need 24 hour care and attention and are fed soy-based infant formula every 2-3 hours, day and night, by the dedicated staff and volunteers.  Ashley’s new group of friends will stay together to form a new family. They will remain at the Refuge until they are about 16-24 months old when they will begin a release programme to prepare them for their return to the jungle.

On the day of the incident, the rescue team phoned ICE, the local electrical company, and they came out the following day to install the necessary wildlife protection equipment on the transformer to prevent further deaths.  As well as rescuing and rehabilitating injured or orphaned howler monkeys, Refuge for Wildlife’s Stop the Shocks Committee is dedicated to raising funds to purchase and install wildlife protection equipment on uninsulated wires and transformers in Costa Rica.