The beginning of 2013 is proving to be exciting and eventful! On January 21st, the Ketapang baby school orangutans made the move to our new center in the village of Sungai Awan.

The group handled the 25 minute drive well and spent the rest of the day and night getting used to the sights and sounds of their new surroundings in the habituation cages. The next morning, they were introduced into the forest school enclosure, where they will learn what it takes to live like wild orangutans.

Merah, Galang, and Marcela took to the trees straight away, which was not surprising given their more feral nature. They have been busy building nests and have also taken turns being the one who is reluctant to return to the cage for the night. Butan is one of the fastest climbers, and spends much of her time patrolling the treetops in search of ant nests. Big boy Roy and little Jacky have surprisingly shown some confidence while going high in the trees, and Ceria looks good while swinging there as well. Jack seems to be happiest when acting tough, and he makes a mess by breaking off all the dead branches he can find. 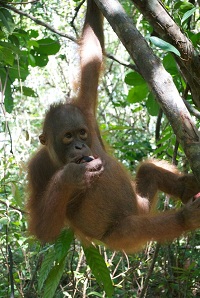 Both the animals and staff are getting used to the new routine, and we are constantly looking  for the best ways to teach the skills needed for survival and to encourage those individuals who require a little more help.

Joyce remains very active and is a clever little girl. Her medical procedures went well, and the results look good! In a short time, she will finish her initial isolation period and can be introduced to the group and the forest. She has been the first to use the accomodation in the spectacular new building dedicated solely to quarantine.  We are trying to wean her off close contact with humans as she is still very dependent on people after living with a family for a year. Joyce is gaining some confidence while climbing in the trees and loves to be outside.  When the wind blows, she opens her mouth wide and lets her tongue taste the breeze. 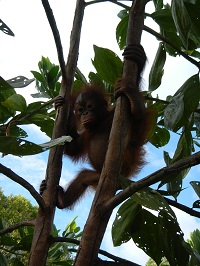 There will certainly be further news shortly as preparations are made to move more individuals in the near future.